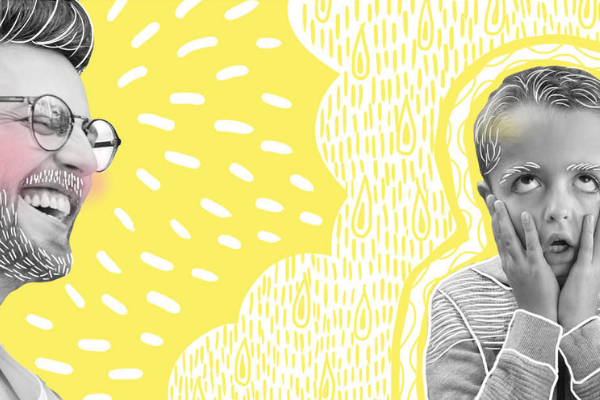 Fathers, please note. Whenever your child says “I’m ready” it is a legal requirement that you say: “Hello, Ready, I’m Dad!”

The telling of extremely lame “jokes” has been a duty for adult males since the first people evolved.

You can even see this habit developing right before your eyes in small boys.

If you laugh at your son’s joke, he will repeat it multiple times, eventually taxing your ability to simulate laughter.

But it is when a male achieves fatherhood that a massive biochemical change takes place, causing him to pretty much LIMIT HIS UTTERANCES to Dad Jokes.

Other members of the family have to play their parts, providing set up lines.

And that includes children — who fortunately pour out a stream of set-up lines pretty much automatically.

CHILD: “Daddy, can you make me a jam sandwich?”

DADDY: “Abracadabra! Bing! You are now a jam sandwich!”

Guys who are not yet fathers can rest assured that your family members will find this totally endearing (“infuriating”), and will show their delighted appreciation by rolling their eyes, palming their faces and screaming abuse.

The nature of fatherhood was on this newspaper columnist’s mind after a reader sent in a news story from the Al-Massae newspaper of Morocco, in North Africa.

A professor went to his doctor in the small city of Sidi Slimane for a routine check-up. The doctor did some tests and told the unnamed man (let’s call him Professor Sidi) that he was completely sterile, and had been all his life.

This came as a surprise, as Professor Sidi’s wife had apparently borne him nine children.

A somewhat awkward conversation later took place, which must have gone something like this.

SIDI: “The doctor says I’ve been sterile all my life. So our children aren’t mine.”

SIDI: “Do you have anything to say for yourself?”

This columnist consulted a lawyer who said that paternity fraud is illegal in most countries, including Morocco (sorry, Mrs. Sidi), but not in England.

There, women can legally deceive their husbands about their children to their heart’s content without fear of punishment.

UNLESS the man is a member of the royal family, in which case it is a crime under the Treason Act of 1351.

There are A LOT of laws which only apply to women who marry British royals, and I hope someone has told Meghan Markle.

This should, one hopes, make this columnist’s wife happy to have married him rather than good-for-nothings such as Will and Harry. Being rich and handsome isn’t everything, you know.

There is a scientific reason dads tell bad jokes.

Mothers have deep verbal relationships with their children, but most fathers are genetically unable to do this, so connect on a silly level instead.

DAUGHTER-ON-THE-PHONE: “Dad, I’m busy, can you call me later?”

On the downside, it is well known that male humans have bad timing and poor self-awareness, which is why Dads will launch a Dad Joke when people are not in the mood.

Such as this conversation that took place in this writer’s house the night before writing this column.

DAUGHTER: “Can you call Mum’s phone? Mum can’t find it.”

Meanwhile, all serious fathers should prepare a Dad Joke for their deathbeds.

HUSBAND: “With my hands!”

What a relief to be able to wave goodbye to our children at the beginning of the school year, grateful that schools in Hong...
Read more
Explore

Kennedy Town Hong Kong continues to be a popular hang out with locals, and expats alike. Easy to get to on the MTR (Island...
Read more