Toddlers’ tiny fingers are now tap, tap, tapping away on tablets and swiping on smartphones, but what effects might all this tech time be having on them? 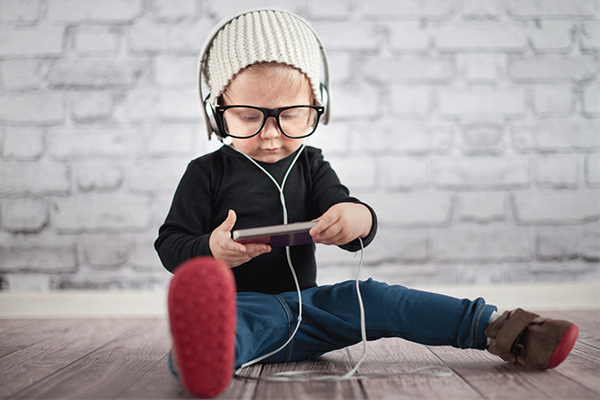 It’s often said that our children are ‘digital natives’, growing up tech-savvy in a world that is increasingly digitally dependent. But in recent years it seems that the age of entry into the digital dimension has decreased, and it is now perfectly normal for toddlers – and even babies – to swipe and tap away on screens with growing dexterity. Our ever-easier-to-use smartphones and tablets contain a whole world of entertainment to keep our children in their grip – games, puzzles, art, stories, films, TV shows and video-calls … It’s no wonder that if you venture into most of our homes and public places, chances are you’ll come across many a mini-me staring intently at a screen.

You might see these electronic pacifiers as a welcome addition to the childcare armoury – after all, toddlers, by their very nature, can be noisy, boisterous and inquisitive, and there can’t be a harried parent in existence who, on occasion, wouldn’t have sold their soul for a wonder-gadget that would keep their whirling dervish of a darling occupied for a few precious moments. The to-do list could be tackled, or an occasional lunch out or coffee enjoyed without turning the café into a makeshift playground or inciting tuts and raised eyebrows from fellow diners. You might even manage a trip to the loo in peace! And surely, if the app or game that is entertaining our little ’uns has some sort of educational element, everyone’s a winner?

Unfortunately, it doesn’t seem to be that simple. As smartphones and tablets are such a recent development, no one can say with certainty what their long-term effects on our children will be. Although there is plenty of research on how television can affect children, as the new technology is interactive and responsive, it may not affect children in exactly the same way. So far, while researchers have found that touchscreen use may have some positive effects – for example, it may improve motor skills, coordination and reaction times, it can be useful for children with autism or ADHD, and it may help early literacy in pre-schoolers – other studies have found that too much tech, too young, may have its downsides. But what are the possible downsides? And how much tech is too much? What’s the problem?

One of the main possible downsides is that if children – especially very young children – spend too much time alone on gadgets, this could be at the expense of other, potentially richer, experiences that are essential for their development. Structured and unstructured play, exploring their environment, using motor skills to play with toys and socialising with other children and grown-ups are all part of a child’s ‘work’, and they are especially important in the early years as they help to build the neural networks that act as the foundations for later brain function.

Most of these experiences can’t be replicated on a touchscreen, although some can be simulated, but often without the human interaction that makes them such valuable developmental opportunities. For example, when a parent and child cuddle up for story time, the child has to process the parent’s voice, tone and meaning, visualise the characters and scenery, and work out the storyline. When a screen tells a story, the words, sounds and pictures are perfectly synchronised into one easy-to-digest package, so the technology almost does the thinking for the child. Children also need to see faces to start the complex process of working out expressions, which can help with developing empathy and social skills.

Another potential downside of our gadgets might be that they are just too good – if a screen captivates and soothes our children so reliably, it might become the go-to tool every time we need to divert our children from potential meltdown situations, or even if they are just a bit fidgety and, well, childlike, when out in public. In the journal Pediatrics, Dr Jenny Radesky, clinical instructor in developmental-behavioural pediatrics at the Boston University School of Medicine, asked, “If these devices become the predominant method to calm and distract young children, will they be able to develop their own internal mechanisms of self-regulation?”

Others have speculated on whether the emphasis on rewards in games could skew our toddlers’ expectations when it comes to completing real tasks in real life. In the digital world, children usually get an exciting audio-visual reward when they master a task, which stimulates the reward pathway in the brain and gives a buzz of achievement. But how will that child find real-life learning when it doesn’t come with a reward at every step of the way?

When it comes to learning, many of the games and apps that our littlies are engrossed in claim to be ‘educational’. However, a 2016 policy statement from the American Academy of Pediatrics (AAP) cites research that shows that often these claims don’t stack up. It says,

“Most apps parents find under the ‘educational’ category in app stores have no such evidence of efficacy, target only rote academic skills, are not based on established curricula and use little or no input from developmental specialists or educators.”

The only way to know how ‘educational’ an app or game is, is to research it yourself.

When it’s time to tuck our little ones up in bed, we may find that screen time is shortening their slumbers. While sleep is crucial for children’s development, a study of 715 families done by Birkbeck College, University of London, found that every hour of a child’s touchscreen use was linked to 16 minutes’ less sleep, and those who used screens most took longer to fall asleep.

The study, in the journal Scientific Reports, couldn’t pinpoint exactly why this was the case, but possible explanations include that blue light from the device disrupted the child’s body clock, or the content had an over-stimulating effect, or that the child was up later playing on the device and this had eaten into bedtime, or that those who sought out longer screen time might be more likely to suffer from other conditions such as hyperactivity. More research is needed, but for the time being, it seems that more swiping equals less snoozing.

One more downside of screen use is its possible effects on myopia (short-sightedness). Hong Kong already has one of the highest rates of myopia in the world, and it seems that small-screen usage will only exacerbate problems. At a Hong Kong Department of Health report launch in 2014 on the health effects of internet and screen use, Dr Ko Tak-chuen from the College of Ophthalmologists of Hong Kong pointed out that myopia is associated with near-work tasks, and overuse of electronic screen products will increase the risk of myopia progression.

How much?But just how much time are our children spending on screens? As technology moves so fast, and as our lives become increasingly screen-saturated with every passing month, it is difficult to come up with accurate statistics. However, the Birkbeck study in the UK found that 51 per cent of six-to 11-month-olds, 75 per cent of toddlers (six months to three years) and 92 per cent of 25 to 36-month-olds used a touchscreen device on a daily basis. Although the average screen time for six-11 months was six minutes, some were spending two-and-a-half hours a day on screens, and some 12-18-month-olds were spending as much as five hours per day on screens. A 2016 survey in the UK found that one-third of British under-fives owned a tablet or smartphone.

So how much screen time should our children be having? The AAP surveyed the available evidence and issued guidelines. It advised parents that under-twos should avoid screens, other than for video-chatting, and that for over-twos, content should be carefully chosen, watched with parents, and not used for more than an hour per day.

Some parents might worry that if they don’t get their children up to speed on tech, they will be behind when they start school. According to the AAP, this will not be the case. They say, “It is important to emphasise to parents that the higher-order thinking skills and executive functions essential for school success, such as task persistence, impulse control, emotion regulation and creative, flexible thinking are best taught through unstructured and social (not digital) play, as well as responsive parent-child interactions.”

Bearing in mind the crucial importance of play and social interaction, Dr Jenny Radesky urged parents to increase “direct human to human interaction”, and to make time for more “unplugged” family time. And when we think about unplugging the children, we should take a look at our own habits, too. When our babes see us engrossed in our gadgets countless times a day (OK then, countless times an hour), they’ve got to be deducing that those gadgets are pretty darned enthralling, so a top-down policy of screen rebalance could be a good first step.

Although we don’t yet know how screens will positively or negatively affect our children in the long-term, we do know that when they are wrapped up in the digital world alone for too long, it is using up precious time when they could be exploring the real world, interacting with real people and developing the social, emotional and physical skills they will need for life. The AAP says that the period from birth to five years is “a time of critical brain development, building secure relationships and establishing health behaviours.” It seems that none of these things can be outsourced to a screen. Yet.

The American Academy of Pediatrics issued the following guidelines to help families balance their children’s media use.

For children aged 18-24 months – if you want to introduce digital media, choose high-quality programming and use media together with your child. Avoid solo media use in this age group.

For children aged two-to five years – limit screen use to one hour per day of high-quality programming, co-view with your children, help them understand what they are seeing and apply what they learn to the world around them.

Avoid fast-paced programmes (young children do not understand them so well), apps with lots of distracting content, and any violent content.

Turn off televisions when not in use.

Avoid using media as the only way to calm your child.

Monitor children’s media content and what apps are used or downloaded.

No screens one hour before bedtime, and no devices in bedrooms overnight.