Karmel Schreyer takes us on an adventure to Kauai, known as the Garden Isle. 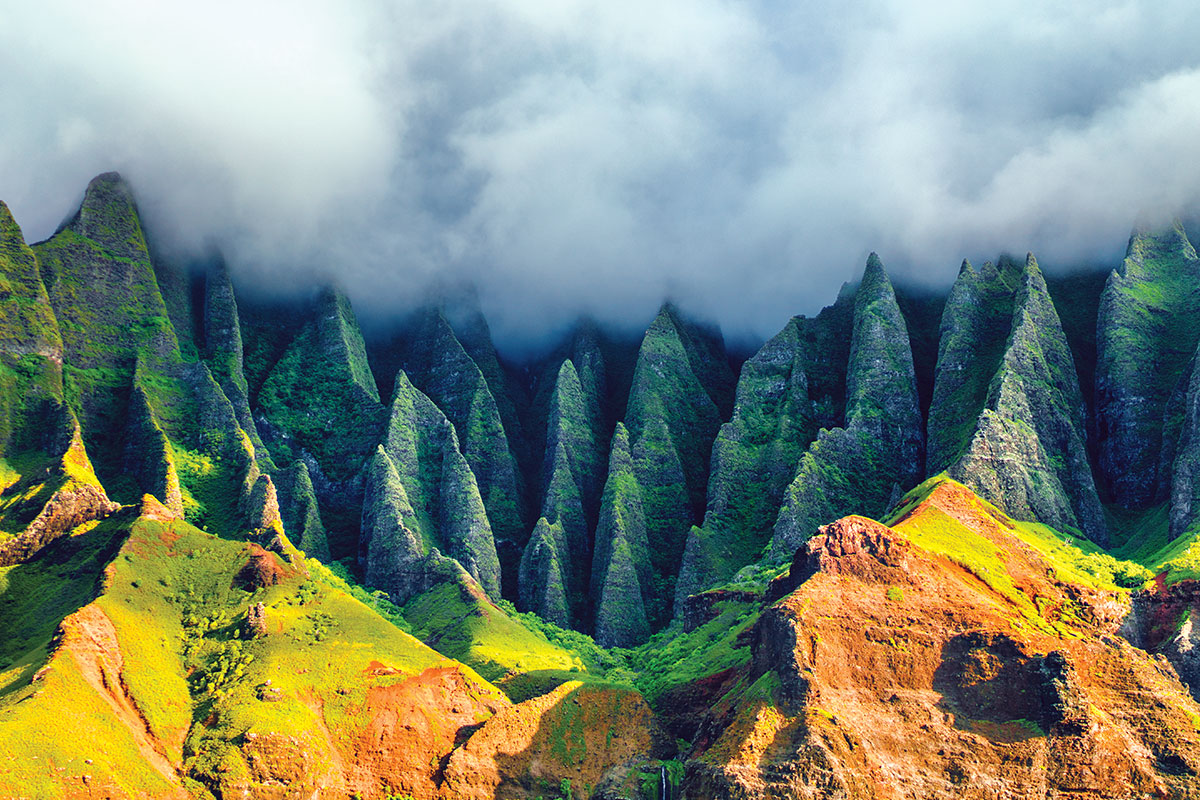 ‘Ohana’ means family (in the Hawaiian language). ‘Family’ means no one gets left behind. But if you want to leave, you can. I’ll remember you though. – Lilo (Lilo and Stitch)

Rather than dreading a trans-Pacific crossing as you plan your next vacation, consider this: descending halfway into the 12-hour flight, onto a green and mountainous oasis in the ocean. Well-known but often overlooked, Hawaii offers a variety of vacation options within easy reach. Kauai, the state’s ‘Garden Isle’ is recommended for what it has to offer as much as for its distance from the frenzy of Honolulu or Waikiki. It is an easy yet exotic destination; part Tahiti and part Albuquerque. Here, you find lush gorges, waterfalls and rugged canyons alongside beachside luaus, taco trucks and poke bowls. There is plenty to see and do – and eat and drink – to keep everyone in your ‘ohana’ satisfied.

Many superlatives are used to describe Kauai, with the ‘most unique’ and ‘least-American’ culture in the state, it is a mix of polynesian, Japanese, Chinese and some Western influences. It is the nothernmost island in the Hawaiian island chain and is the oldest of the main islands. At 5.8 Million years old, Kauai boasts more rivers, beaches and waterfalls than any other island in the state – as well as the longest and only navigable river. Kauai is home to: the largest coffee plantation in America (and produces more taro than any other island); the largest protected population of the state bird, the Nene Goose; more feral chickens than any other island (thanks to 1992 Hurricane Iniki, apparently); the greatest number of microclimates in the smallest space; the wettest spot on earth (Mt. Waialeale averages 450 inches of rain per year). In addition, half of the island’s 111miles of coastline are sandy beaches, and 97 per cent of the land is given over to agriculture and conservation. But before your children’s eyes glaze over with all these fact, be sure to tell them that Kauai is where the film Jurassic Park was shot. And it is also the birthplace of Disney’s cutie Lilo – of Lilo and Stitch fame. Kauai is a place so beautiful, it’s where ‘Experiment 626’ and its alien handlers chose to crashland. You can tell your ‘ohana’ that.

I won’t leave the best till last; you simply cannot go as far as Kauai and NOT take a helicopter tour of the island. So small it is measured in hectares, you can get a birdseye view of the entire island in one 45-minute ride. And what a show it is as you fly over the rugged NaPali (meaning the cliffs) coast to the north, over Waimea Canyon – referred to as the Grand Canyon of the Pacific Ocean – following the rivers and streams. And here’s a tip: the helicopters can seat between four and six, and the best spot is behind the pilot. These helicopter have doors of glass right to the floor (some have no door at all) which makes for thrilling viewing as your ‘copter sails over beaches and coastal flats and coffee plantations, then spins you down into ancient volcanic caldera, up over lush tropical hillsides that end in jagged cliffs over rugged ocean coastlines. That is, if the cloud-cover cooperates. There are plenty of options to get on the water, too; from stand-up paddling and kayaking on the Wailua river, to dolphin and whale watching, deep-sea fishing, and sunset dining by catamaran. Although Kauai is not the place to catch Hawaii’s largest waves, there is surfing, too. 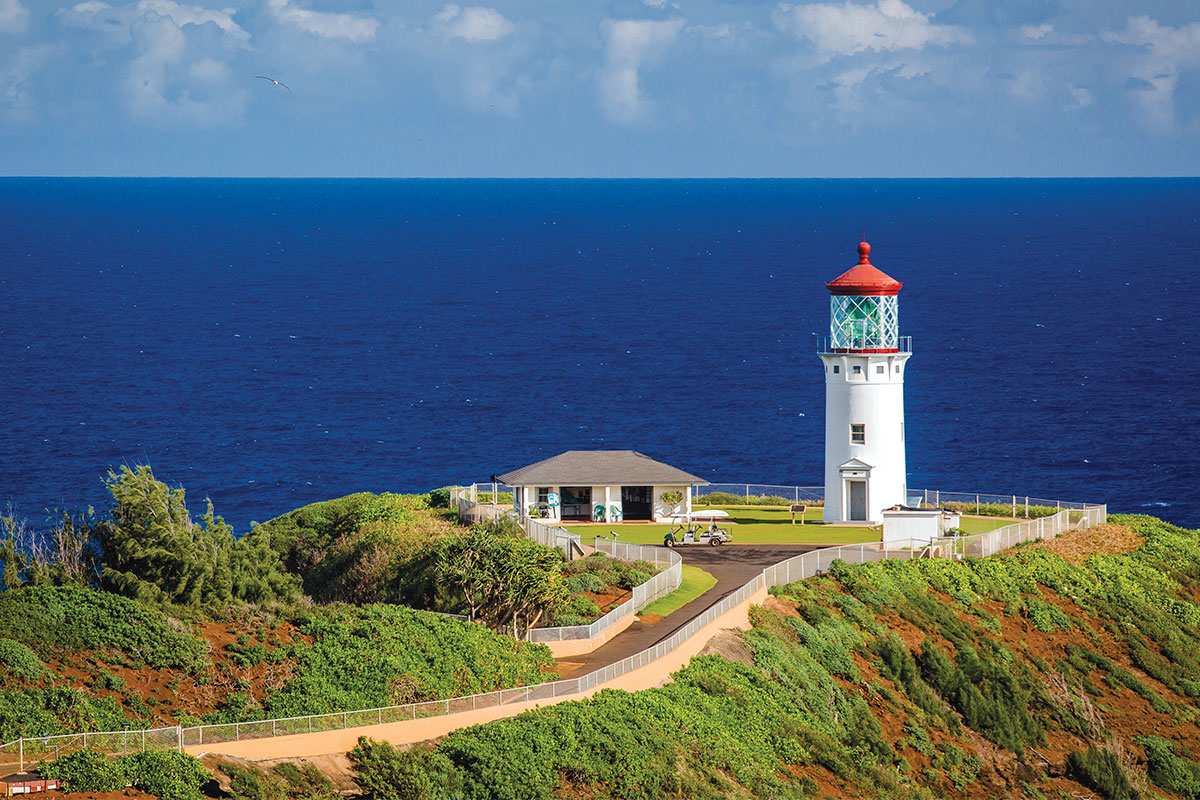 Despite its small size, there are several little towns on the island, some of which have distinctive native charm. The International airport is in the town of Lihue, where you can pick up your rental car and quickly drive to Poipu, an area with an assortment of resorts, beachside hotels, lovely restaurants, and all the basic amenities.

The coastal highway does not circumnavigate the island due to the rugged terrain of the NaPali coast, but from Poipu you can make it to the end of the road on the east side in about one and a half hours. The village of Hanapepe is the inspiration for the setting of the Lilo and Stitch movie, and though the movie theatre is no longer in operation, there are an assortment of cute cafes, an excellent bookstore, and several trendy art galleries including one where you can buy second-hand Hawaiian floral shirts at US$10 a pop. And of course there are wild chickens everywhere, just like in the movie. This is a good place to fortify yourself before you head up to see the canyon, and on the way back be sure to explore the enormous Kauai Coffee Company plantation which has its own museum and train trip through the rows of coffee bushes. There are varieties of coffee to sample and lots of coffee ice cream.

Driving in the other direction north from Poipu, explore Wailua River State Park, with waterfalls, and kayaking and stand-up paddling on the river of the same name. There are trails to hike in the many forest reserves in this north-east quadrant. And don’t forget to check out the Kilauea Lighthouse with nearby bird sanctuary and botanical garden (with mini golf). Hanalei Bay and Waioli Beach Park are near the end of the roadjust beyond Princeville and are a must-see. The town of Hanalei has a lovely assortment of small hotels, shops, eateries and food trucks. 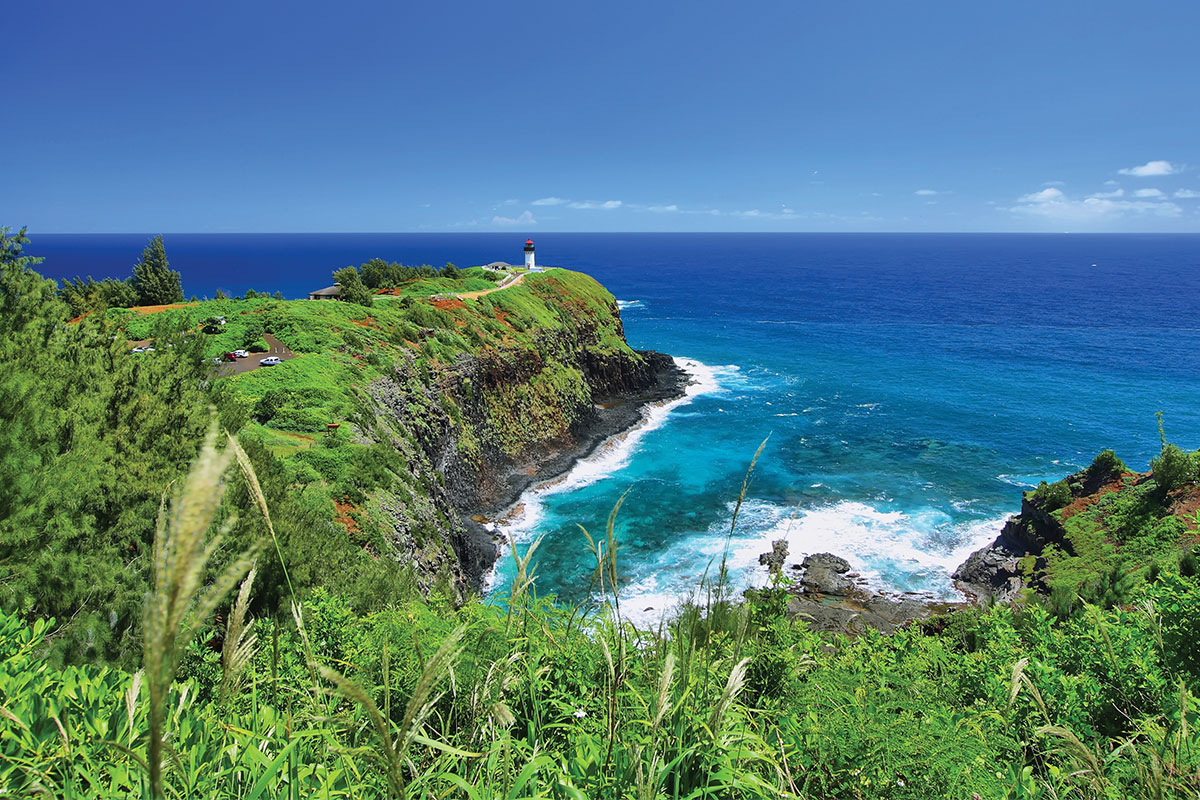 Polynesia on the beach

If you never expect to visit Polynesia you can still experience something similar in Kauai. Book early if you want to go to a luau, with hula-dancing, grass skirts, ukulele music, fire-juggling performances – and, of course, feast on succulent roast pig baked in the ground. Other local edibles include poi (a purple paste made from ground taro root), lomi salmon, papaya, pineapple, and the shellfish opihi – considered Hawaii’s own ‘superfood’.

Aloha… till next time.

As the plucky Kauai native, Lilo, foretold in the Disney movie that bears her name, “if you want to leave, you can…”. But you won’t want to. Of course, the need to get the kids back to class will help you resolve your dilemma, so you will eventually be saying ‘aloha’ (which means ‘goodbye’ as well as ‘hello’) to Kauai. You’ll remember it though.

How to get there: You can fly United Airlines via Guam to Honolulu, then onwards to Kauai. But we recommend flying direct to the garden island via a pit stop in Tokyo. Why not take the chance to spend a night in Roppongi district, or even walk the streets and samples the restaurant scene in and around Narita. You’ll find that Japan and Hawaii have a shared history; so you may as well explore as much as you can. If the streetlife of Tokto tires you out, remember you will have plenty of time to sleep it off at the beach.

Where to stay: many options abound, from Air BnB, to guesthouses, to Sheraton-type hotels and Marriott Vacation-club resorts. Book ahead for holiday periods, of course.