The Hong Kong Sevens with Children – A Family Guide

Reading Time: 5 minutesFor anyone who lived in Hong Kong BC – Before Children – the Hong Kong Sevens was one of the highlights of the year. Sports fanatics from around the world descend on the city to join in the carnival atmosphere of a weekend of non-stop rugby union and socialising with friends.

But don’t assume that the Sevens and family fun are mutually exclusive. While it’s a fixture on the calendar of serious sports fans, there are a number of events, part of the overall carnival, which have created a family appeal. It is possible with a bit of planning for both the big and little people to be part of what is one of Hong Kong’s biggest parties.

From humble origins in 1976, the Hong Kong Sevens is now an integral part of the World Rugby Sevens Series. In a nutshell, Sevens is a slimline version of traditional rugby with only seven players per side instead of 15. It is played at a fast and furious pace with each game consisting of two seven-minute halves with a one-minute break in between.

It is often a testing ground for emerging players with previous Sevens carnivals seeing the likes of David Campese and Jonah Lomu
on the field.

The 2016 Cathay Pacific/HSBC Hong Kong Sevens will be held this year on the weekend of April 8-10 in the 40,000 seat Hong Kong stadium. Tickets are always in hot demand, especially with Rugby Sevens about to make its Olympic Games debut in Rio de Janeiro this year. 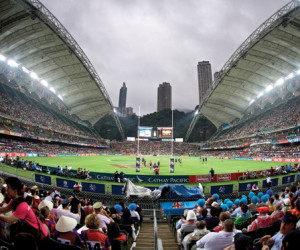 The authorised channels include viagogo – the Official Ticket Marketplace. In addition to being the place to buy tickets, this is also the recognised channel where fans can sell tickets when they can no longer attend an event. Some might have been lucky enough to pick up one of the 9,000 tickets offered in a public ballot between November 27, 2015 and January 31, 2016. The Hong Kong Rugby Union also allocates 5,500 child tickets to the Hong Kong Mini Rugby Football Union for the Friday and Saturday of the Sevens. There is, of course, a lot of last-minute selling on online forums, but Hong Kong Rugby Union urges fans to use the official channels.

One of the really fun aspects o

f the Sevens is the tradition of fancy dress, which the kids will love. There is no end of themed family outfits to get into the spirit of things. But make sure you come prepared as the weather can be unpredictable and the kids might get sick of wearing costumes after the first hour or two. Do bring a bag of ponchos, hats, sunglasses, sunscreen, rain jackets and spare clothes.

and sanitiser and wet wipes are also advisable. But remember you can’t bring in cans, glass bottles or plastic bottles. Also banned are vuvuzelas, rugby balls, selfie sticks and electronic music equipment or fireworks. The full list is on the Sevens website.

The Hong Kong stadium is at 55 Eastern Hospital Road in So Kon Po, just behind Causeway Bay and Happy Valley. The closest MTR station is Causeway Bay – use Exit F to get to the stadium, which is a 10-15-minute walk away, up Caroline Hill Road. The stadium is also a short walk from tram stops in Causeway Bay and Happy Valley. In previous years there has also been a shuttle bus from Admiralty Station. It is also possible to take a taxi and the Sevens website contains the name of the Stadium in Cantonese for you to show your driver.

Once at the stadium, entry is usually quick and you can be at your seats within 10 minutes. When choosing your location at the Hong Kong Sevens with kids in tow, it might pay to avoid the notorious South Stand – this is where the party people traditionally gather, although they now have begun to spread out into the North Stand as well. Families may find the East and West stands more suitable, with the front rows of both offering good views and close proximity to food and toilets. It’s best to get there early to get lower level seats as they are unreserved. Head higher for a great bird’s-eye view. Between the North and West stand is a Meet and Greet area where players will meet fans and sign autographs. And if you have forgotten to dress up, there are also often face painting booths by the North, East and West stands.

The action proper starts on Friday with gates opening at 11am. There is usually a mini rugby showcase early on each day of the Sevens featuring players aged 7-12 years, which are always popular with young fans. The highlight of Day 1 though, is the Opening Ceremony after 5pm. This is always a spectacle with marching bands and dancing lions and dragons, guaranteed to keep the attention of even the youngest fans.

Gates open at 7am on the Saturday and Sunday, with another mini rugby showcase early on both days. Qualifiers and pool matches dominate Day 2 with the entertainment a highlight in the mid-afternoon. Last year’s entertainment featured The Village People and saw the stadium turn into a huge sing-along session. Day 3, which is semi-finals and finals day, also has entertainment in the mid-afternoon. Check the Sevens website for the latest schedules at www.hksevens.com.

Fuel for the family

There is an array of the usual stadium food on offer inside Hong Kong stadium but it is not the finest fare so if you are looking to fuel up away from the mayhem of the stadium, Happy Valley or Causeway Bay is probably your best bet with a family. While ‘BC’ you might have been tempted to the bars of Wan Chai or Lan Kwai Fong, Happy Valley and Causeway Bay have family-friendly dining in abundance. In Causeway Bay try Cali-Mex which has built a reputation for its kid-friendly meals. In Happy Valley, the spacious Classified is perfect for a family group or Jaspa’s – one of the Castelo Concepts group of eateries – serves good, filling meals and are quick to give kids crayons and colouring pages as soon as you are seated, keeping everyone happy.

Fun outside the stadium

If you have missed out on tickets it is still possible to be part of the fun at the HSBC Sevens Village, just opposite the stadium. It’s free to the public, with games shown on the giant screens. There are also interactive games for people to take part in, face painting, entertainment and food. Last year it also became the place to go to beat the food queues in the main stadium. The Village also caters for teens – they have a specially designated area for hanging out with friends. The village opens in the mornings.

Another aspect of the Sevens is the Official Fan Party, which will be held outdoors at the Observation Wheel by the ferry pier in Central. The games are shown on giant screens and there will be family entertainment for little children such as face painting and balloon twisting. This is also the venue for the Official After Party. In recent years a party at Cyberport’s Podium has also become popular, with games on a big screen, food stalls and family-friendly entertainment such as magic shows.

Ahead of the Sevens, the week in the lead-up is now known as Rugby Week. There are a host of events guaranteed to provide family fun as part of a festival of club and international tournaments. Precursors include the Cathay Pacific/HSBC Hong Kong Women’s Sevens, the ICC Lightshow which takes on a Rugby theme and the Beach 5s at Repulse Bay. The 5s include beach netball and dodgeball and is a free, family event. The Kowloon Rugby Fest and the Hong Kong Tens are also part of the lead-up.

Now you know how to take full advantage of the Hong Kong Sevens with kids! If you need a reminder as to why rugby rules, be sure to check out our other rugby features or – even better – simply head out to one of the upcoming rugby games in Hong Kong to get a front seat.

Nature and Wildlife Found in Hong Kong While the kids are on school holidays, why not get out and explore Hong Kong's diverse nature and...
Read more
Explore

Where to Donate Second Hand Books in Hong Kong

Looking to rehome your used books so they can be enjoyed by others? Here are all the places you can donate second hand books...
Read more