Tara Jenkins asks how much physical activity our children should participate in each day. 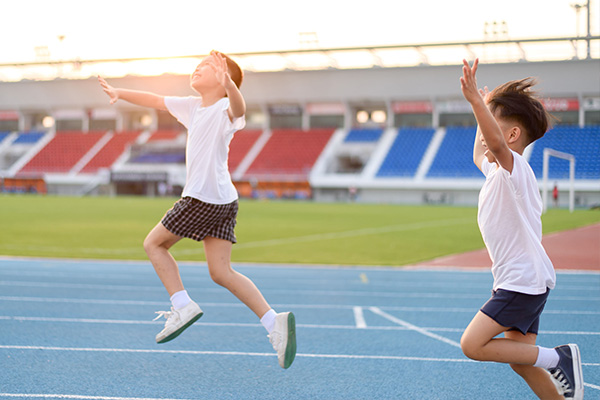 “If access to a playground, sporting activity or some form of exercise is a challenge, then we must be creative,”

“On occasions when my kids are at home and need to move, we will wrestle and rough-house on my bed (until my wife arrives!), or set up challenges in the lounge, where they must jump from pillow to pillow in order to make their way back to the couch. We blow up balloons, and go crazy. Or we turn up the music and engage in one of the oldest forms of human expression: dance. Children at an age where they are inhibited by free flow expression often feel safer doing so in their privacy of their own home, and sometimes a parent dancing gives ‘permission’ or creates space for the child to join in”.

“Anecdotal evidence of the look, attitude and lack of further engagement from my daughter when I throw out my best dance moves leaves me to suggest you play this card as you see fit, however!”

As an ex-national level sportsman and Director of Training at Joint Dynamics, a multi-disciplinary practice in Central blending physiotherapy, personal training and manual therapies, Cox is well aware of WHO global guidelines suggesting children and teens participate in at least 60 minutes of moderate to vigorous intensity exercise every day.

“It’s important to break up extended periods of sedentary sitting,”

“If a child or teen develops poor postural habits, it can extrapolate forward to an adult life limited by dysfunction, lethargy and compromised athleticism”.

It’s a topic particularly pertinent in Hong Kong, which scores consistently poorly in studies around children’s physical activity. Last year’s Chinese University study* found less than half of children aged between two and 17 met the international recommendation of one hour’s physical activity per day, while a 2016 survey carried out by Hong Kong Baptist University’s Centre for the Advancement of Social Sciences Research found more than three in four children exercised for fewer than 60 minutes daily. ‘Hong Kong prisoners get more exercise time outside than our schoolchildren,’ screeched a South China Morning Post headline in 2014, when Dr Robin Mellecker of the HKU Institute of Human Performance warned sports and physical activity were key to mental wellbeing, and were not prioritised enough in school. Exercise releases ‘happy hormones’, Melleker explained, that contribute to student’s mental wellness and facilitate learning.

Fortunately, when the weather plays ball, there’s a multitude of ways for children to be physically active in the city. Ines De Beer, an osteopath from Southside-based wellness centre, The Round Clinic says:

“We are very lucky in Hong Kong to have infrastructure that makes it easy to access hills for trail running or hiking, the sea for watersports, and the community playgrounds and courts dotted all around the territory. Most districts will have sport facilities for public access, so there is always a way to do some exercise”.

It is key children learn to enjoy sport in early childhood years, she says, and that there is variety in the activities they are signed up for.

“I always advise enrolling children aged five to six in lots of different activities, and see which one ‘sticks’! The best choice is to mix cardio – running in soccer or rugby, for example – with some brain-hand/foot coordination, such as passing balls in tennis or soccer. When a child is growing, they need stability and more importantly, muscle co-ordination. Running, swimming or yoga will help them find good balance, and improve muscle strength alongside muscle flexibility, which is necessary for avoiding growing pains. My advice is for every child to do lots and lots of swimming, as it provides the perfect balance between cardio, stamina building and muscle strengthening, while moving the entire body to ensure flexibility. Pure weight training, conversely, is not advised before 14 years old, depending on when a child reaches puberty. The general rule is if puberty has set in, and the body is changing along with increased muscle mass, teens can begin mild weight training”.

Andrew Cox says it is a child’s natural state to be energetic, and having a home with a large backyard is obviously ideal when it comes to engaging in regular, unscripted exercise, but he believes this is less important than the insidious pull towards television and hand-held devices.

“Limiting or scheduling time on these devices can only encourage children to engage in other activities,” he advises. “If a child is starting from a low base, or coming from a place of minimal exercise and physical activity, then it’s best to introduce a relatively small amount of exercise (30 minutes per day, say), and keep it fun so the child will want to go back”.

Over the coming weeks and months, he suggests incrementally increasing that amount to find the maximum time where a child stays enthusiastic and healthy. Older children in their mid to late teens, can develop a huge capacity for exercise, as long as they support themselves with a nutritious diet and adequate sleep.

At the other end of the spectrum, what about children who are doing too much? Generally, experts agree warning signs are lack of motivation or loss of interest, while physical indications include constant tiredness, short temper, pain and discomfort or an increase in injuries – especially those that seem to happen as a result of a seemingly innocuous event, or those that creep up, and don’t go away. Postural tension and head injuries are all common, says De Beer, and if muscle strengthening exercises haven’t been done gradually enough – or too early in development – there is a risk tissues that are not fully formed fall prey to conditions like Osgood Schlatter Syndrome – an overuse injury of the knee – or tendinitis.

Cox says the overuse activities he sees in children tend to be sport-specific, so swimmers will exhibit shoulder pain, runners, lower limb pain, and those who play sports with a high level of variability – such as rugby – tend to have ankle, knee, shoulder and even neck pain.

“The variability in injury is matched by the amount of variability in the chosen sport. This is why cross training for swimmers and runners is so important,”

“However, children have an incredible ability to heal and rebound, as long as they are placed in the right environment.”

He also points out that if a child has the onset of injury or pain and continues to do the same form of exercise and movement patterns without varying intensity, it will inevitably lead to a greater inflammatory response, and thus an extended healing time.

“The body needs time to heal, and the most powerful anabolic agent known to mankind is sleep. Take phones or devices away at 8pm each night and return them the next morning! Sleep should be coupled with healing foods that are high in protein, such as fish or chicken, and foods that help support a body with an inflammatory response, such as dark green leafy vegetables, berries, pineapple, extra virgin oil and avocados. Curtail activities – not more than three or four per week – and mix up the child’s schedule to introduce variability and fun. This will allow the injured tissues of the body to heal, and the nervous and motivation system of the child’s body to re-energise”.

If the pain is consistent, extends for weeks and does not show signs of repair, however, see your doctor, physiotherapist, chiropractor or osteopath.

*The Report Card on Physical Activity for Children & Youth

If you're staying local this festive period, there's heaps of fun things happening. From activities to camps and staycations to beautiful afternoon teas and...
Read more
Christmas 2022

The excitement and anticipation of Christmas morning is a big deal for little kids. Some families like to create a Christmas Eve box to get...
Read more