Forget the operation, you can change sex by clicking here. By Nury Vittachi 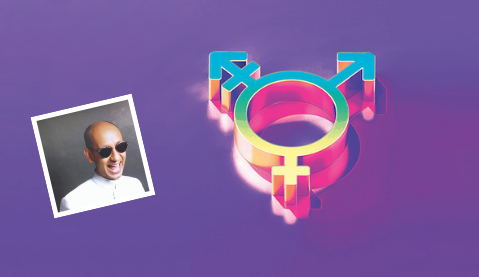 In Norway, any child over the age of six can now legally change his or her sex.

“Daddy, guess what, I’m a female now! Daddy, what does female mean?”

East and West seem to be different planets on matters of gender.

In parts of Europe and the United States, if a bearded man working as a professional sperm donor claims to be female, using the word “him” for him (oops!) is a hate crime, and repeat offences can lead to a six-month jail sentence.

This was on my mind as I have two family members travelling to Europe while writing this column. Before they left, I warned them to avoid all gender questions.

“But what if someone gives me a form and I have to tick a ‘male or female’ box?”

I told her that this would definitely be a trick question, and she should throw the form back in their faces, saying:

These days if you meet a Western baby, you can’t tell what sex it is, since many consider it an arrest-able offence to dress girls in pink and boys in blue. You have to say something like:

“What a cute little, er, offspring, it looks just like one or other of its, er, begetters.”

In several Western countries you can now change your sex by clicking an online form. It was revealed in recent days that an Argentinian man named Sergio Lazarovich got his pension money paid five years early by changing his sex to female. Now if this column was being written in the West, I would have to refer to this guy as a woman, because Western journalists are required to follow their subjects’ self-chosen sex, even when it is patently idiotic to do so.

Lazarovich’s relatives are quoted saying that he is the sort of man who makes homophobic comments and has a string of girlfriends, including after his, er,

I feel really sorry for my journalistic colleagues in the West ha ha ha ha.

Schools in Sweden are instructed by the government to

One Swedish couple was unhappy when their daughter came home having been taught to be rude, loud and untidy (that is, more like a boy). The teacher was unapologetic.

“This is what we do here, and we are not going to stop it,”

she told the reporter.

I think making girls behave like boys may qualify as the dumbest idea in history, beating even Chairman Mao’s

“Let’s kill all the birds”,

and Hollywood’s decision to finance a film called

Meanwhile, I am updating my all-purpose answer to my children’s questions, from

“Ask your other begetter”.