Can osteopathy provide a solution for recurrent middle ear infections in children? 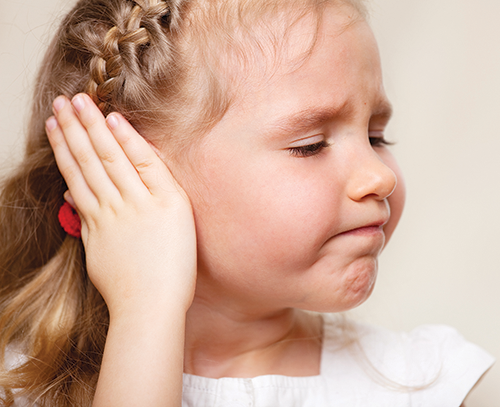 Recurrent middle ear infection (otitis media) is one of the most frequent illnesses of early childhood, and typically is seen in children from six months to six years of age. Countless visits to the paediatrician, antibiotics and sleepless nights owe their existence to this culprit.

Until recently, most children with middle ear infections were given antibiotics. However, recent studies have demonstrated that this is unnecessary for the majority of children, and current recommendations in the U.S. and Europe is to delay initiation of antibiotics.

Research in middle ear infection has found that it is commonly associated with Eustachian tube dysfunction (see diagram A to anatomically place the Eustachian tube in relation to the ear).

Could osteopathy be a solution?

The ear, nose and throat share the same mucosal tissue, which means that if your nose is congested, mucous secretion will also occur in the ear which will also be congested. In normal conditions, excess mucus is drained through the Eustachian tubes.

Epidemiological data demonstrate significant reduction in middle ear infection after the age of six. In infants, the Eustachian tube is orientated more horizontally than it is in adults. As the bones of the skull grow and expand over the first six years of life, compression of the Eustachian tubes reduces, and the change to a more vertical positioning increases drainage of the middle ear.

Empirical studies in the U.S. over the last few decades have demonstrated that osteopathic treatment has been one of most effective therapies for recurrent middle ear infections.

Gentle osteopathic mobilisation as well as cranial technique, focused on the base of the skull and the temporal bone, significantly improve drainage of the middle ear by opening the Eustachian tubes and helping restore normal function.

Very little is known to the public about cranial osteopathy. Cranial osteopaths use subtle techniques that take extensive study and many years to master. These indirect techniques correct the inherent motion of the cranial bones, which subsequently offsets the compressions on the surrounding tissues.

Cranial osteopathy is not to be confused with craniosacral therapy, which is one of the modalities of cranial osteopathy that has been simplified by therapists into a purely mechanical model. It is however, not fully comprehensive and is often used without applying the principles of osteopathic medicine.

With middle ear infections, the osteopath will often focus on the temporal bones, which have often been impaired post-birth due to the compression forces in utero and during the birth itself. Extensive knowledge of anatomy allows the osteopath to correct not only the temporal bones but also the causes and effects of the chronic issue, thus addressing the sinuses, the jaw and very often the spine and pelvis.

The osteopath treats the body as a whole and makes sure it is a functioning unit, so do not be surprised if your practitioner corrects your child’s pelvis when addressing a middle ear infection!

Dr Damien Mouellic is trained and experienced in all modalities of osteopathy. Over the last six years he has been working alongside general practitioners and specialists in central Hong Kong and has founded the Hong Kong Osteopathic Association, and co-founded the Stanley Wellness Centre. www.stanleywellnesscentre.com