“Congratulations!” said the doctor. “You’re pregnant. So, for the next nine months you mustn’t eat any pâté, blue cheese, mould-ripened soft cheese, liver, sushi, smoked salmon or seafood. Make sure all your eggs and meat are cooked thoroughly, don’t eat any cold or cured meats, and make sure all your dairy products are pasteurised. Don’t eat anything from a deli counter, make sure you wash all bagged salad carefully, steer clear of ice cream, and be extra-careful at barbecues. Cut down on tea and coffee. Fish like shark, tuna and swordfish contain lots of mercury, so avoid those, too. Oh, and don’t drink alcohol.” 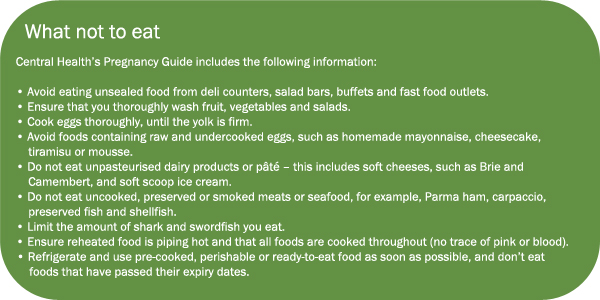 After that exhaustive list of do’s and don’ts, the next nine months were spent in a state of perpetual PMT – pre-mealtime tension. Every morsel had to be scrutinised. Was the side salad scrubbed squeaky clean, or did it come with a side order of toxoplasmosis? Was the steak cooked to the bug-zapping level of leathery-ness? Were there uncooked, salmonella-harbouring eggs in that tiramisu? By the time the cheese plate came out, I had full-fledged listeria hysteria. Every mealtime felt like Russian roulette – one wrong move could harm my unborn baby. How could I possibly enjoy eating for two when I could barely find enough “safe” food to nibble for one? It was enough to get me reaching for a glass of cold white – if only I could.Same same, but different

Although the science is the same the world over – toxoplasmosis, salmonella and listeria are potentially hazardous to pregnant women wherever they live – women don’t always receive the same advice. Even within one country, advice can vary depending on which medical practice is advising you. So are there even bigger variations in advice between countries? Would French or European mums-to-be be warned off Brie and pâté? Would Japanese ladies have to endure a sushi embargo? Speaking to some mums who now all live in Hong Kong, it seems that the answer is both yes and no.

In Belgium, mum-of-four Fiona went through each pregnancy eating pretty much what she wanted. Early on in each pregnancy, she was tested for toxoplasmosis, and was found to have the antibodies to fight the disease. She says, “My doctor never gave me a list of foods I couldn’t eat. Of course, I was still sensible – I wouldn’t eat anything that looked risky – but I didn’t agonise over everything.”

By contrast, across the border in France, things were different for Ghilaine. She had the first of her three pregnancies there and remembers, “I was given all the usual advice about undercooked eggs and meat, unpasteurised cheeses and cured meats. I was tested every month for toxoplasmosis. And wine bottles in France now carry a warning that pregnant women should not drink alcohol.”

On the sushi front, Becky, who lived in Tokyo for one of her pregnancies, says that her doctor never gave any specific advice on what she could and couldn’t eat during pregnancy. But Jo, who was also pregnant in Japan, says that her doctor gave her plenty of information, and told her not to eat raw fish. The Department of Health in Japan also advises pregnant women to avoid fish with high mercury content. 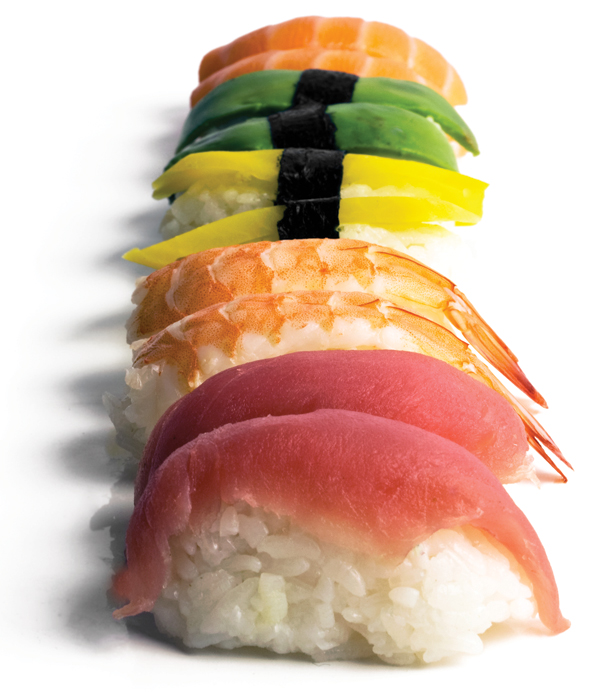 Just to complicate matters further, there are additional beliefs about pregnancy and nutrition in Hong Kong based on traditional Chinese medicine and culture. Registered dietician Kendy Tam explains, “In Hong Kong, there are many Chinese cultural beliefs that are related to pregnancy, and this strongly influences the diet of pregnant women. In my previous experience, these beliefs include avoiding pineapple, shellfish, lamb and even certain vegetables. In Hong Kong, many women consult a Chinese [medicine] practitioner during pregnancy since it is believed that pregnancy is a ‘hot’ condition, and to balance the ‘yin and yang’ many foods are avoided.”

In the face of all this differing advice and beliefs, how does a woman navigate the maze of pregnancy nutrition?

Alison Wood, a midwife at Central Health, says: “There can be a lot of confusion about what is safe to eat, and what isn’t, during pregnancy. The main advice I give is simple – make sure your food is fresh, and make sure it is thoroughly cooked. Make sure everything is pasteurised, and don’t eat anything that has been lingering around too long, such as cold meats from a deli counter.”

Alison continues, “We spend a long time going through the advice with women, and we give them a book with all the information. It really is very important. We have seen cases where women have become ill through eating contaminated food during pregnancy. It doesn’t happen often, but when it does, it can be very serious. We would rather women knew the facts so they can avoid being in that situation. We encourage women to get in touch with any questions or worries, no matter how stupid they feel they may be. It’s better to get advice rather than searching the internet for answers, as the information found may be misleading or simply wrong.” 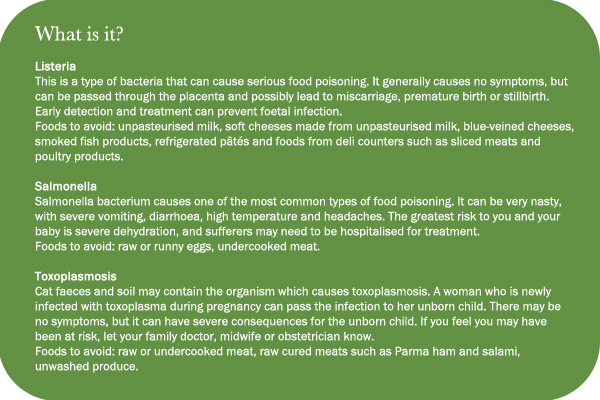 With some countries offering routine testing for toxoplasmosis antibodies, would this be a viable test to introduce for all pregnant women? Alison says, “We don’t screen routinely for toxoplasmosis, although some women do ask for it. Even if you do have the antibodies, you still have to be careful about your diet to avoid listeria anyway.”

What about if you have had a blow-out meal of oysters and champagne, or indulged in a steak that was so rare it was almost still mooing, before you found out you were pregnant? Alison says, “We come across many women who worry about what they have done before they found out they were pregnant. However, it seems that the majority of women know they are pregnant very early on. Considering that ovulation is usually two weeks before a period is due, the occasion you are worrying about could be before ovulation has even taken place. I would recommend discussing any worries with your family doctor or OB/GYN at your antenatal visit.”

Whose baby is it anyway?

When you are pregnant, it is not just you who is obsessed with everything you eat. In the same way that people who you’ve never so much as shaken hands with will feel perfectly within their rights to come up and feel your bump, everyone, from work colleagues to distant relatives, will have an opinion on what you are eating. If you are trying to follow the guidelines to the letter, the older generations will scoff that they never followed any advice and it didn’t do their babies any harm. And if you just can’t resist a spoonful of your partner’s chocolate mousse (raw egg alert!), fellow diners may gasp in horror. But are your pregnancy dietary choices ever any of anyone else’s business?

One woman in the UK was taken aback that a supermarket deli counter employee questioned her choice of cheese (the cheese, a Canadian unpasteurised cheddar, was a bit of a puzzle: was it safe because it was a hard cheese, or unsafe because it was unpasteurised?). “What followed was the most patronising encounter I have had the misfortune of experiencing in a long time,” Janet Lehain told the Daily Mail newspaper. “The only way I could buy the cheese was if I promised I wasn’t going to eat it myself. How ridiculous that I had to openly lie in order to buy a piece of cheese! Are they going to stop obese people buying chocolate and other high fat food?”

Similar stories abound. Pregnant women report being questioned by shop staff while paying for prawn sandwiches, ordering lattes, or asking for slices of salami. But the food retailer can face a difficult decision. They can speak up and risk causing offence, or say nothing and risk withholding important information. Some staff might see it as their duty to speak up, and may even see it as a safeguard against any possible future lawsuits. In Australia, Renee Cherry is currently taking legal action on behalf of her toddler son, who she alleges suffered intestinal damage when she contracted listeria poisoning while she was pregnant with him – she contracted the infection from a chicken wrap she bought on a flight.

But not all mums-to-be are offended by outside dietary interference. Mum-of-two Sarah says, “I certainly never felt patronised. I remember one of my colleagues telling me not to eat an egg mayo sandwich, although I knew it was perfectly OK – the eggs were hard-boiled and the mayonnaise was shop-bought. I didn’t mind people offering advice, even when it wasn’t asked for, or even when it wasn’t up to date. They’re only trying to help.” 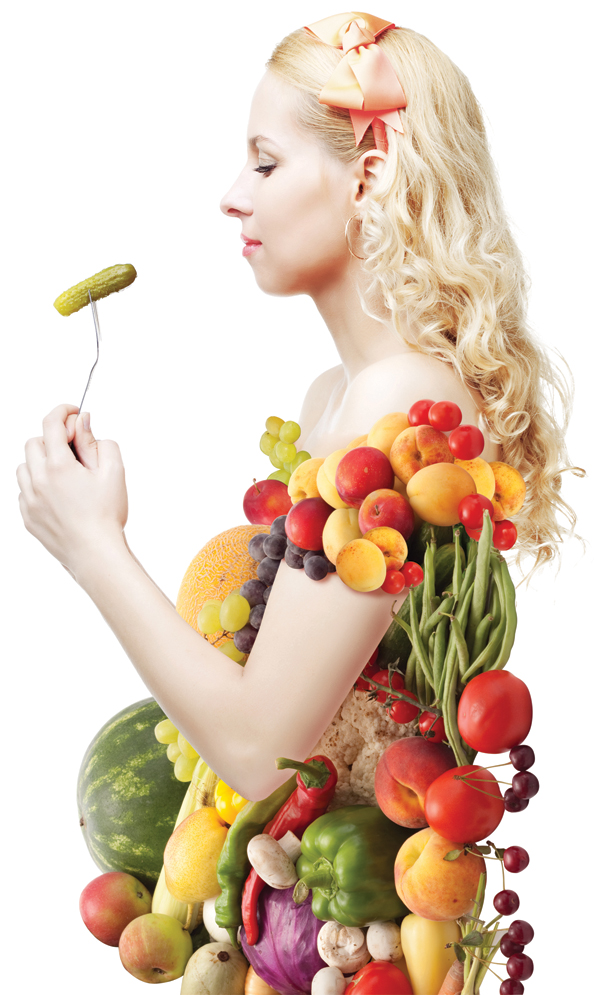 If you fancy a little tipple while you’re pregnant, you will undoubtedly face a barrage of criticism. In the US, some bars make the decision to abstain for you, with signs such as “Pregnant women: Please do not ask our waitstaff to harm your unborn child by ordering alcohol.” It has been well documented that heavy alcohol consumption while pregnant can have tragic effects on the unborn baby, but research on light drinking is inconclusive – some studies seem to suggest that the odd alcoholic drink causes no harm in most cases, while other studies say that a lack of harm cannot be proved.

In many countries, including America, Canada, Australia and New Zealand, the thinking on alcohol seems to have shifted towards total abstinence. Midwife Alison Wood explains, “In the 80s, the advice we would give on alcohol was two to three units of alcohol, two to three times a week. We now advise to have none. Research can’t tell us what is a safe maximum amount of alcohol for every woman to have in pregnancy, so the guidelines now recommend not having any alcohol at all.”

At first, it can seem like a hard nine-month sentence when you are given a list of things you can’t eat or drink – and it is human nature to start craving a chunk of Brie and a glass of red wine the moment you are told you shouldn’t have them. But it might help to focus on the things you can have and come up with some creative substitutes. If you are partial to pâté and toast, you could swap it for hummus and crackers. If you usually grab a chicken salad for lunch, you could make yourself a bean and pasta salad instead. If you are at a barbecue where the chef is adept at charring the meat on the outside but leaving it oozing with blood in the middle, you could always opt for the safer baked potato. And here in Hong Kong, plenty of food is served freshly cooked and piping hot, with no raw egg or smelly cheese in sight! There are still plenty of things you can eat and the restrictions aren’t forever. And – at the risk of sounding like Marie Antoinette – you can still eat cake …