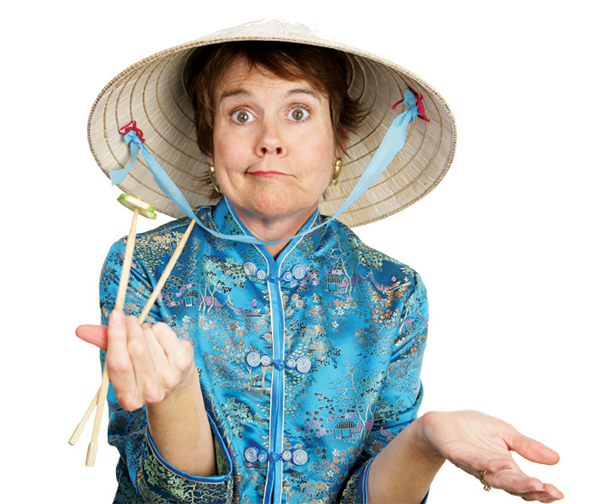 I’ve been cursed with a thousand years of bad luck.
How could I not be, surrounded by paper offerings to the dead, on an occasion that was meant to be a celebration of life?

It all began when I attended a party hosted by a former adult student. She’s a lovely lady, but I did wonder if she paid attention at all in class. As part of her festive décor, she’d hung paper offerings all over her apartment. She believed that these very detailed crafts of cheongsams, Ferraris, and mahjong sets were delicate works of art. In fact, they were joss paper, or funeral paper, meant to be burned for our dearly departed. A cheongsam, for example, might be burned so that a female family member who had passed on might enjoy such a dress in the afterlife. The mahjong set might similarly bring her entertainment. So, in our host’s macabre interpretation of what it meant to “go local”, she had actually embraced with abandon all that symbolised the dead.

“No matter how Westernised your Chinese friends seem to be, always remember that there is a good chance they were brought up by very Chinese parents.”

I blame myself. Perhaps in class I should not have presented information about cultural sensitivities in a humorous, jovial way. If I’d made it more earnest, lowered my voice an octave and put on a sombre face when describing what offends Chinese people, she might have taken me seriously. And I would not feel the need to shower repeatedly in vain efforts to wash the bad luck off. I’m only half kidding.

So here’s a tip: No matter how Westernised your Chinese friends seem to be, always remember that there is a good chance they were brought up by very Chinese parents. Some of their teachings, especially those that relate to culture and customs, stick. And, however odd it may seem to you, some transgressions are more serious than others.

This realisation crystallised for me many years ago during a long, leisurely lunch with a good friend. This friend is Muslim and, while he is not orthodox, he does observe many of the customs he was brought up with. Except for the drinking. So at this lunch, while he was enjoying his third glass of wine, I asked him if it was not against his beliefs to drink alcohol. He responded, with a twinkle in his eye, “Some things send you straight to Hell. This is not one of them. Now, pork? That is a completely different story. I don’t eat pork.”

While I knew he was not 100 per cent serious, I still filed that conversation away in my memory bank. So, when he comes to our home for dinner, I never serve pork. It’s just a matter of simple consideration, or, what I call my 3Cs Principle: Consideration Costs nothing and Causes no awkwardness. I know: it’s a little cheesy.
But it’s all part of respecting our neighbours, and this respect is especially important when we are expatriates in a foreign land – in this case, a Chinese land.

Which brings me to another birthday party that sent me home, scrambling for the shower.

I accompanied my daughter to one of her friend’s birthday parties recently. At this party, the birthday boy opened his presents in front of his guests – a first for me. But no, that wasn’t the faux pas. One of the gifts he opened up was from his mum, and it was a beautiful, very realistic sports car, made out of paper. Funeral paper. Yes, it was another “toy for the dead”. I could not believe my bad luck. Actually, I guess I could.

To make matters worse, the parent had included more of these “toys for the dead”, in miniature, in the goodie bags. The Chinese parents in attendance were gobsmacked and horrified. I saw one trying to get her child to toss it in the bin. Since I felt like I knew the host fairly well, I asked her if she knew what these paper foldings actually were. She said – totally without guile – that she did, but didn’t mind. They looked great to her and their intended purpose was no big deal.

And she was not totally wrong. No one was offended or upset except the Chinese parents. Their own kids loved the paper offerings. My daughter thought her paper cheongsam was worthy of being on permanent display. The birthday boy loved his gift. Everyone that really mattered at the party was happy. So should we sensitive grown-ups not just get over it?

In my humble opinion, no. I believe that it’s a host’s responsibility to do everything reasonable to make sure our guests are comfortable and enjoying themselves. It is basic party etiquette that spans countries, cultures and time. In return, it is our duty as guests to behave in a manner that will add to the gaiety and celebration that the occasion warrants.

Which was what I did on both occasions: I kept calm and carried on. I chatted. I laughed. I behaved like I was having loads of fun. Because I was.

When I got home, I said a prayer, burned up the miniature funeral paper offerings and wrote a thank-you note to my host for a wonderful day. Because it truly was.

The History of Halloween

Ever wondered about the history of Halloween? You've come to the right place. Also known as Hallowe'en (Hallows' Even or Hallows' Evening), Allhalloween, or...
Read more
Celebrate

Where are the best places places to celebrate Halloween in Hong Kong? If you're looking for some spooky fun, check out this list of ghoulish...
Read more