A Guide to Chinese, Western and Indian Wedding Etiquette

Reading Time: 6 minutesJust how well versed are you in wedding etiquette? Do you know that it is inauspicious to present a Chinese couple with a wedding gift wrapped in white? Or that according to Indian wedding etiquette it is inappropriate to wear red as a guest at the ceremony? Perhaps you know that it’s inconsiderate to drag your children to an American wedding unless they have been invited. Or perhaps you don’t.

As a cosmopolitan metropolis, Hong Kong provides its residents with ample opportunities to learn about a myriad of religious and ethnic beliefs. Whilst we may get away with being oblivious to cultural nuances on a daily basis, it’s still advisable for guests to know about the traditional do’s and don’ts before attending the wedding of a friend or colleague.

It would be impossible to cover the wedding traditions of every religion and nationality in this article, and often weddings are a unique fusion of different cultures. Courtesy of Hong Kong’s renowned wedding professionals, here is a broad overview of guest etiquette at traditional Chinese, Indian and Western weddings.

If you have married within the last three months or have recently lost an immediate family member, you may wish to save this article for a later date, because it would be inappropriate for you to attend a Chinese wedding at this time, advises Leongwoo Yan, an international award-winning photographer who specialises in destination weddings in South East Asia and Hong Kong.

But if you’re not celebrating or commiserating, let the preparations begin.

While Chinese weddings may incorporate many traditions, such as the tea ceremony where the couple kneels and serves tea to their elders, these events are for family members only. Guests may be invited to attend a civil or church ceremony and a Chinese banquet, which includes a nine-course meal. According to Leongwoo, some Chinese wedding hosts still serve shark fin soup as one of those courses. Today, however, it’s acceptable not to eat it if it’s served to you. Simply leave it uneaten and it will be collected with the empty dishes prior to the next course being served.

Guest attire is one of the most important aspects of wedding etiquette – regardless of culture. When deciding what to wear, avoid colours that may upset the couple and their families. Sonya Yeung, founder of luxury destination wedding planning company, Bliss Creations, says, “Guests should not wear red, as the colour represents the luck, happiness and fortune of the new bride. Traditionally, guests were also expected to avoid wearing white, blue, black and green; however, there are fewer taboos around this nowadays.” 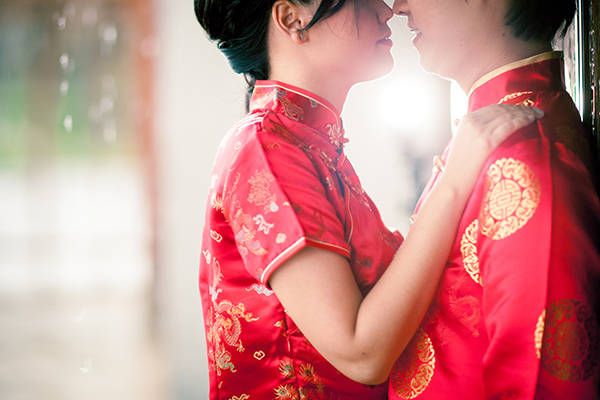 To cover the cost of their meal, guests traditionally give money in a red envelope (lai see) as a wedding gift to the couple. According to Sonya, “Amounts should be no less than $800 per person and should include even amounts of bills, but not the number four, as it symbolises death. Including the number nine within your lai see is good luck as the pronunciation means ‘long and forever’.” 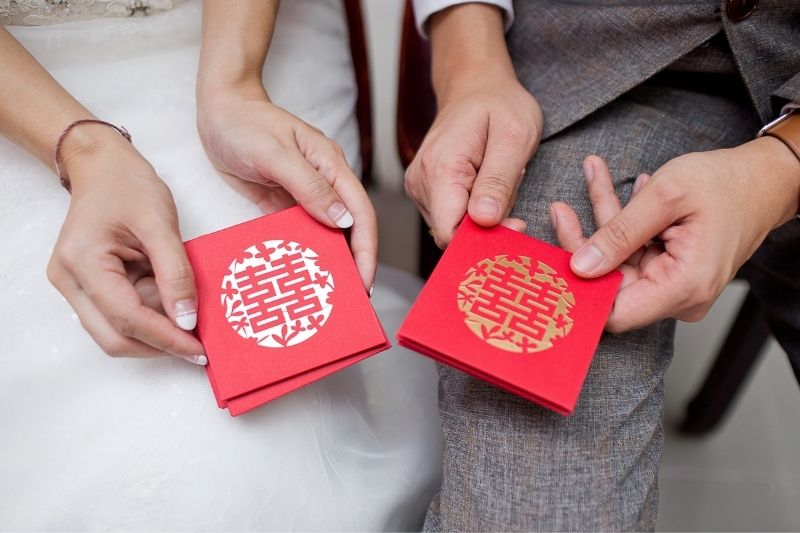 Lilian Tang and her British husband married in the Seychelles just over ten years ago. The couple had a civil ceremony and, in order to please Lilian’s parents, customary hair-combing and tea ceremonies. Whilst her parents are not entirely traditional, they do expect guests to follow wedding gift protocol.

“Gifts that symbolise death or the end of relationships should not be given to the couple. These include clocks, towels, pointed and sharp objects, gifts in black or white or sets of four,” says Lilian. 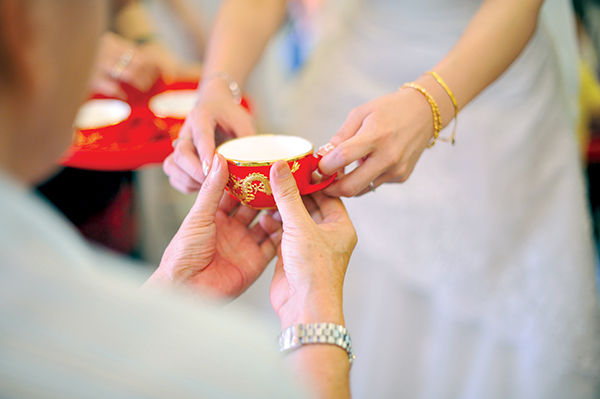 Natasha Mahtani Mohinani had a traditional four-day Hindu wedding in Mumbai, India. Events included engagement, mehendi (henna), sangeet (dance) and reception parties, prayer and wedding ceremonies. According to Leongwoo, Indian wedding etiquette means that you should never refuse or throw away the blessed sweet food called “karah prashad”, which is typically served at Sikh and Hindu weddings. You should accept it sitting down with cupped hands.

Read more: What to Expect at an Indian Wedding 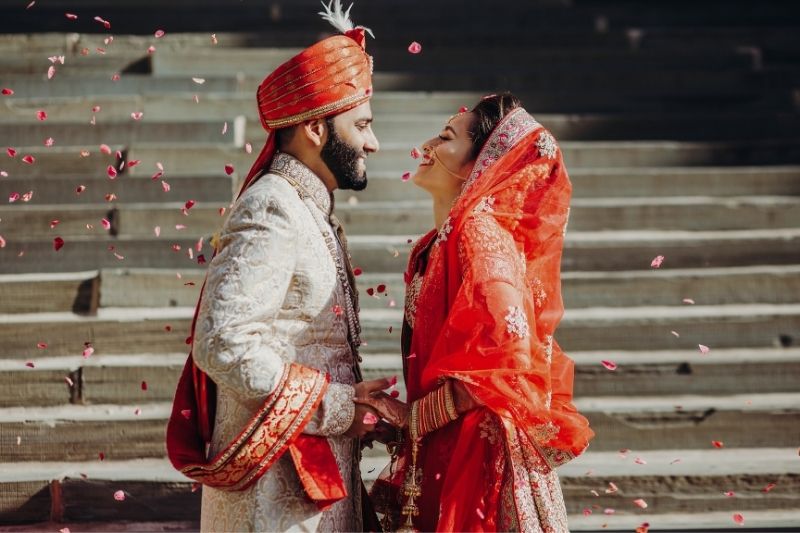 Whilst each wedding will differ based on the religious beliefs of the couples, most Indian weddings include hundreds of guests partying for a week, or longer. You may, therefore, require more than one “bling” outfit to see you through the festivities.

Arroding to Indian wedding etiquette, you may choose to wear Indian clothes or the Western attire that would be appropriate for a dressy wedding. The rule to remember is that modesty matters for the temple ceremony. Avoid plunging necklines and short hemlines, especially given that you may be required to sit on the floor. You may also need to cover your head at the temple. “A dupatta, or scarf, has many uses, such as covering your head, bare shoulders or that plunging neckline,” advises Hardeep Jandu, Hong Kong representative for Meena Bazaar, one of India’s premier Indian clothing providers for women.

See also: Attending a Traditional Indian Wedding? Here’s Exactly What to Wear as a Guest 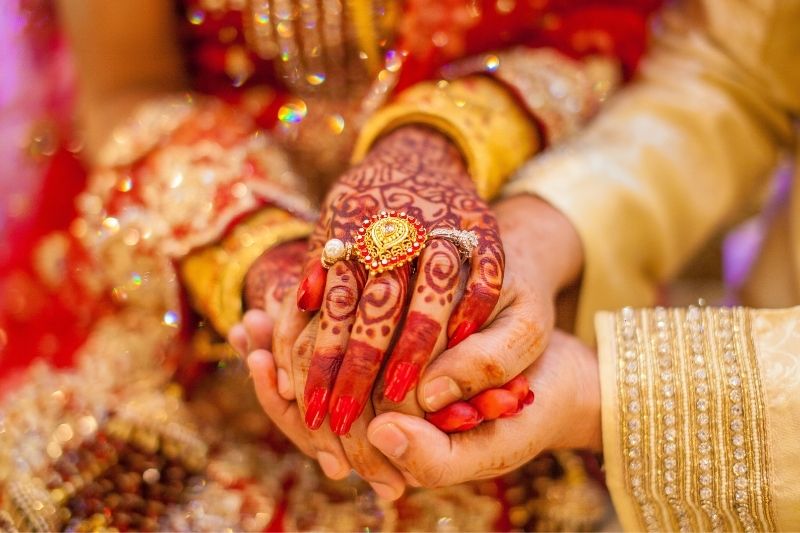 “While Chinese weddings may incorporate many traditions, such as the tea ceremony where the couple kneels and serves tea to their elders, these events are for family members only.”

Whilst the colours black and white are associated with funerals and mourning, guests can wear either colour if their clothes are “festive looking,” explains Hardeep. “The more discerning female guest will still avoid wearing a shade of red, which is the traditional bridal colour.”

There are three little words that are likely to appear on many an Indian wedding invitation: “No gifts, please.” However, this doesn’t mean that you should turn up empty-handed; rather, in line with traditional Indian wedding etiquette, you are expected to give money to the bride and groom. With hundreds of guests in attendance, the couple will have a hard time figuring out where to store multiple toasters and photo frames. Money is therefore considered to be a useful gift.

“Whatever the amount of money given, it should always be given in uneven amounts, ending in the number ‘one’, which signifies good luck. The money is presented in a decorative coloured envelope,” says Hardeep.

A note of warning if you are asked to give a speech at an Indian wedding that is likely to include numerous conservative relatives and family friends: Hardeep says, “Avoid any mention of previous girlfriends or the groom’s drinking habits. His pranks may be hilarious to you but Aunty may not be impressed!”

“Compared to Asian counterparts, Western weddings are much less superstitious, though there are still traditions that are upheld today,” Sonya advises. Whilst the wedding programme may be different depending on the nationality and religious beliefs of the couple, guest protocol is generally the same.

“Compared to Asian counterparts, Western weddings are much less superstitious, though there are still traditions that are upheld today …”

If you have been invited to a Western wedding, remember to RSVP, says Sonya. According to wedding traditions, on the day, you should arrive and take your seat a few minutes before the ceremony starts, bearing in mind that the front rows are generally reserved for close family or friends, with the very first seats reserved for the bridal party. 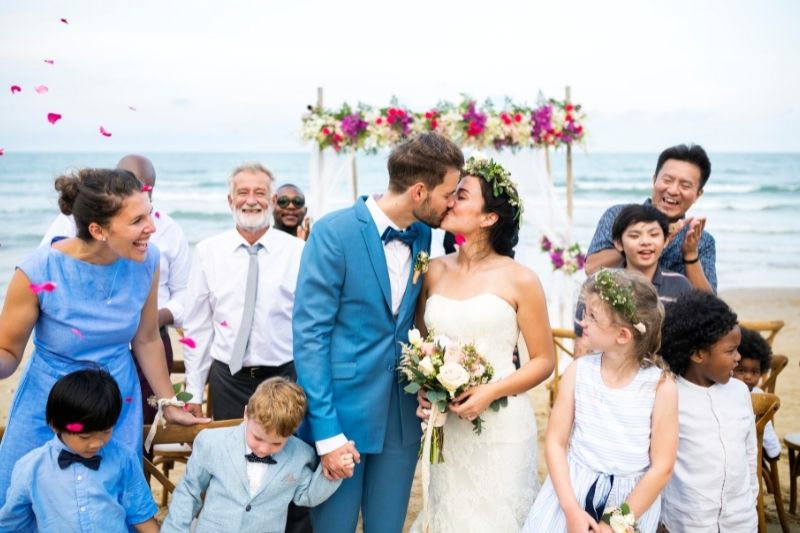 During the wedding breakfast or reception, remember to sit at your assigned table. “The bride and groom have spent a lot of time considering who should sit where, so respecting this is important,” advises Sonya. It is typically inappropriate to bring guests unless they are specifically invited, so if you are single, confirm ahead of time whether you’re allowed to bring a date.

Allison Clarke and her husband married in London, England, in 2003. “We had a church wedding in the afternoon, and planned a reception party for 80 guests later that evening. Except we had 82 guests as my work colleague brought her children with her, which was annoying.”

Photographer Leongwoo confirms: “Some British and American weddings are for adults only, simply because kids below 12 years old can pose challenges to formal weddings.” He adds, “Some receptions are also cocktails only, so food will not be served.” And, keep in mind, at a Western wedding, it is considered rude to leave before the cutting of the cake.

Read more: Why is Cake Cutting so Important? 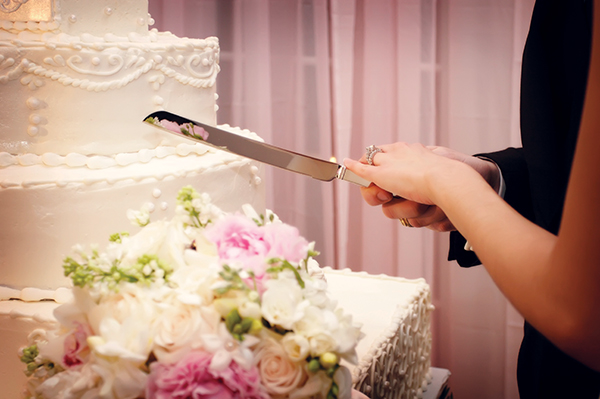 At some point during the day, the bride may turn her back to all the guests and toss her bouquet over her head for single women to compete in catching. According to tradition, the woman who catches the bouquet will be next in line to marry. But if you’ve made the almighty mistake of dressing in white, the colour reserved for the bride on her special day, expect to have a lot more than a bouquet thrown at you.

In terms of what to wear, “The level of formality, from casual to tuxedo, is often mentioned in the wedding invitation,” Leongwoo advises.

While some couples may appreciate money as a wedding gift, others may find it impersonal, says Leongwoo. Sonya says, “Some couples sign up on a gift registry. If not, consider a thoughtful gift that will be useful to the couple.”

If you’re attending a wedding not of your own culture, the gift of good manners goes a long way. Do your homework, be considerate and, to be the perfect wedding guest, wholeheartedly enjoy the experience – without getting too drunk, that is!

Valentines Day is almost around the corner and these local florists will surely help you to surprise your loved one. From luxury flowers handmade...
Read more
Celebrate

Lai See Etiquette in Hong Kong: How to Give and Receive Red Packets

It’s that time of the year – brightly-lit Christmas trees are being exchanged for blooming peach blossoms, and pots of poinsettia are making way...
Read more