What is Thanksgiving and Why do we celebrate it?

Happy Thanksgiving to all who celebrate this family holiday full of tradition. For those who didn’t grow up in the US or Canada where this national holiday is celebrated by all, here’s a little history to help you understand why we celebrate Thanksgiving.

It’s a four-day weekend. You don’t have to buy gifts, dress in costumes, hide eggs or give out candy. You can eat as much as you want, watch as much football as you want (Hook ‘Em Horns!). And, you get to enjoy one of the greatest Peanuts animated programs ever.

Yes, I’m talking about turkey, The University of Texas Longhorns and A Charlie Brown Thanksgiving.

Fun fact: the current American version of Thanksgiving (day off work, turkey and stuffing, pumpkin pie) owes its inception to a woman named Sara Josepha Hale. Novelist, magazine editor and cultural influencer, Hale was the Oprah of the 19th century, according to Smithsonian magazine. But you might know Hale from her other well-known creation: the nursery rhyme ‘Mary Had a Little Lamb’.

Hale’s determination to bring families together for a national holiday turned in to an epic 17-year crusade. As the History Channel explains, in 1789 President George Washington did kick off the idea that Hey folks! Thanksgiving should be a national holiday. It wasn’t his most popular notion. In fact, the rest of the country basically said, Meh. Then, in 1827, after reading a diary of pilgrim life, media mogul Hale started a campaign to make Thanksgiving an annual U.S. tradition. It wasn’t until 1863, however, in the middle of the American Civil War, that her efforts paid off. That’s when President Abraham Lincoln officially proclaimed Thanksgiving a holiday to be celebrated on the final Thursday of November. Thanks for the long weekend, Abe!

Nowadays, school children across the U.S. often learn about the very first Thanksgiving feast of 1621, in which Pilgrims gathered together with members of the Wampanoag tribe to share a successful harvest. However, they might not know that those early, hardy settlers and the Native Americans so crucial to their survival ate venison and plain cranberries, not nap-inducing roast turkey and casseroles with mini marshmallows.

Or, as Snoopy serves to his friends: toast and popcorn.

When it comes to the study of Thanksgiving in Hong Kong schools, the pilgrims of history take a back seat to the cultural and societal significance of the day. Thanksgiving is not so much taught as introduced within the larger concept of global traditions and celebrations. The holiday often takes its place beside other seasonal, harvest fests such as Diwali, Canadian Thanksgiving and Mid-Autumn Festival, while encouraging students to reflect on one of its basic tenets: giving thanks. Children also learn about the three other pillars of Thanksgiving: people returning home to their families, the sharing of special food, and of course, how to make turkey art from the outline of your hand. 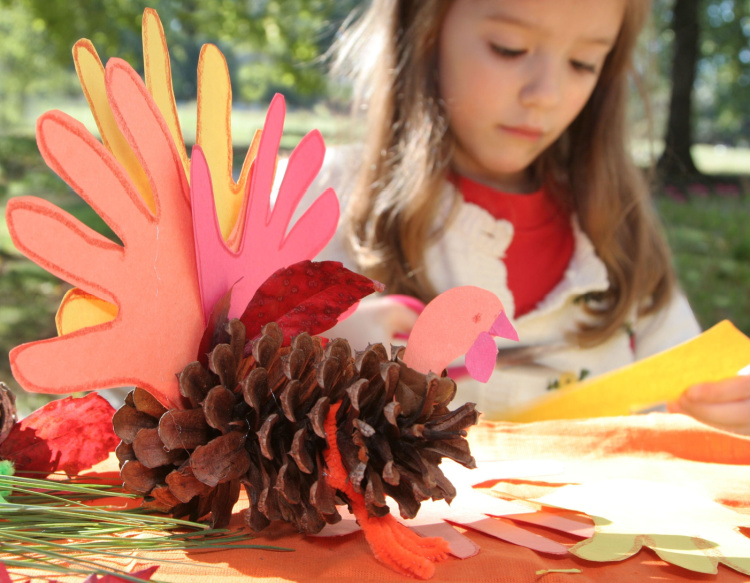 Anna Cooke, a Primary Two teacher at German-Swiss International School, says that in her classroom the child-led focus of their Traditions & Celebrations unit encourages parents to contribute too. When American parents (and grandparents) come in and share how they celebrate Thanksgiving at home, students are made aware of how and why the holiday exists. Course guidelines also ask students to consider why people around the world would celebrate the harvest time of year. Subsequent activities and discussions center on the idea of connecting people through festivals and traditions.

As many Americans can tell you, though they might not mention this in a primary school classroom, Thanksgiving is definitely a time of year when you have to connect with family, whether you want to or not. And no one tells this story better than Hollywood, which has created a whole genre of Thanksgiving-set movies devoted to the contradictory themes of: 1. family is hell 2. no one should be alone on Thanksgiving. For families with children and tweens, I’d recommend supplementing a half-hour of Peanuts with the feature film Planes, Trains & Automobiles: a movie that’s light on dysfunction and adult humour, yet filled with the comedic gifts of John Candy and Steve Martin.

For Hong Kong expats, however, the opportunity to be with family on Thanksgiving and subsequently complain about said relatives is usually a luxury they can’t afford. Too little time, too far to travel, too close to Christmas. For most Americans living outside the U.S., Thanksgiving is just another work and school day.

Over the years, American Jennifer Brown, a long-term expat, and her family have celebrated Thanksgiving in five different countries. She says what she missed most was being with extended family.

“So that would be my grandparents, aunts, uncles and cousins. And I missed the special feeling that comes with a four-day weekend, a four-day weekend when the only expectation is cooking, eating and socialising. No gifts! No fancy décor!”

Fortunately, Brown was able to recreate that family reunion feeling by returning each year to Zhuhai, from Hong Kong, to celebrate Thanksgiving with long-time friends. Having recently moved back to the U.S., Brown says her Zhuhai get-togethers will always inspire fond memories.

“We probably celebrated Thanksgiving with our Zhuhai friends seven or eight times. Four times when we lived there and then three or four times on visits from Hong Kong. That turned in to its own special Thanksgiving tradition that I will miss now that I’m here in the U.S. My Italian-Argentinian friend’s desserts were gorgeous!”

This year, Brown’s two children will be able to experience an ‘authentic’ Thanksgiving with close, extended family. However, according to Brown, they have a lot of catching up to do regarding the meaning of Thanksgiving. Upon my request, she asked them: why do we celebrate Thanksgiving? And the reply? “They literally have no idea,” Brown says. “They know it’s an American holiday where people eat turkey (which they dislike) and pie (which they like). They know we usually celebrate it in Zhuhai. Ask them about Mid-Autumn Festival or Sinterklaas (Holland’s Saint Nicholas), however, and they can explain a whole long story about each.”

I have to credit yearly viewings of A Charlie Brown Thanksgiving for the, albeit sketchy, knowledge my two children – half-American, born and brought up in Hong Kong – have about Thanksgiving. The Mayflower rings a bell, they say, and there is always food. Lots and lots of food.

Back in the 1600s, the food available to settlers at that first Thanksgiving meal was all organic, locally-grown and locally-hunted, which kind of makes Native Americans the original locavore hipsters, if you stop to think about it. In an article for Smithsonian.com, Megan Gambino writes that corn was abundant, in grain form for bread and porridge. Wildfowl was also prevalent, though the bird of choice was more likely to be goose, duck or, interestingly, passenger pigeons, which have been extinct in the wild for over a century. Potatoes, both the white and sweet varieties, had not yet arrived from South America and the Caribbean respectively, and there was no butter or flour for the colonists to make pies.

Luckily for us (but maybe not for our carbon footprint), in Hong Kong in 2017, you can find just about every ingredient you need for a classic Thanksgiving feast. The shopping might require visits to two, three or four different grocery stores (don’t get me started!), but the supplies are there, if you have time to do your own hunting and gathering. Over the years, I’ve distilled my Thanksgiving meal prep down to a few crucial components. 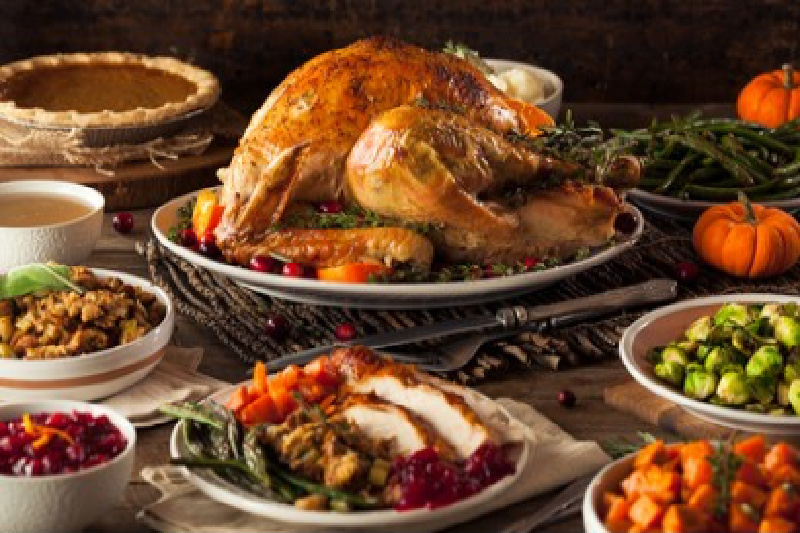 Order the turkey and stuffing. My oven just isn’t big enough and my chef’s confidence not high enough to tackle a tricky roast. Plenty of places around HK, from private clubs to gourmet grocery stores, will cook the bird for you.

All side dishes must be home-cooked. Having grown up in Texas, I like to include a few sides with Southern flare: squash casserole and okra with tomatoes (my grandmother’s recipe using fresh okra from Thailand). I dearly love my Dad’s cornbread stuffing and tried to recreate it one year, but alas, it was not a hit! I guess some dishes just don’t travel well. Also, I have to remind myself that Thai green chilies are way too strong for my squash casserole. Most guests really don’t want to sweat profusely while they’re eating.

Don’t forget dessert! We do pumpkin cookies and pumpkin pie. However, since the Australians in our family struggle to envision pumpkin as a sweet not savoury ingredient, I also try to serve an apple pie. Expat Thanksgivings are all about flexibility!

Talking of food and menus really brings home the fact that Thanksgiving revolves around eating. That’s the bottom line. It’s a universal necessity and unique pleasure that’s enjoyed in all corners of the world. And it really does bring people together. After many years hosting Thanksgiving dinners large and small, I’ve realised how much pleasure there is in sharing meals with friends and in-laws, Americans and non-Americans, and introducing them to my Mamacita’s okra dish, our fabulous pumpkin cookies and, using the next day’s leftovers, turkey and black bean chili.

But, whether you’re cooking home-style dishes, booking a table for a fancy hotel set menu or just dealing out slices of toast Snoopy-style, there’s no need to stress about Thanksgiving and agonise over the food that’s on the table. Sara Josepha Hale might have insisted on turkey and mashed potatoes instead of venison and cranberries, but actually, what truly matters at Thanksgiving is the people sitting around your table, wherever in the world your table may be.

The Impact of COVID-19 Restrictions on Children with Special Needs