If your child seems clumsy and has difficulty planning and coordinating their physical movements, they could suffer from Dyspraxia. Paediatric Occupational Therapist Aynsley Carter explains the condition. 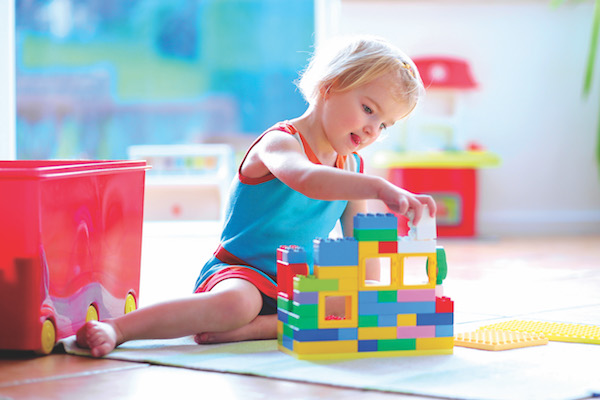 As such, the brain’s structure is connected to the child’s inner body mechanisms, driving movements that ultimately restructure the architecture of the brain. These deceptively simple movement patterns support the development of particular skills such as visual tracking, motor control, postural development and efficient coordination.

But there is a danger that we focus almost exclusively on our child’s cognitive system without recognising the subtle but powerful influence that our bodies exert on every aspect of functioning. Movement is the foundation of our brain ladder and must be nurtured and explored in order to support higher level functioning. Yet sometimes, there may be challenges with the development of a child’s movement, a condition that’s known as Dyspraxia.

Simply put, developmental dyspraxia is an immaturity of the organisation of a child’s movement. In their everyday life, they may find it difficult to learn how to plan and co-ordinate their movements.

Everyday activities of daily life such as dressing, feeding, washing and playing require a strong understanding of praxis – the ability to interact successfully with the physical environment – so that individuals can plan, organise and carry out a sequence of unfamiliar actions and to do what they need and want to do.

Plainly speaking, it is the ability by which we figure out how to use our body and hands in skilled tasks. So for our children, we are talking about tasks like playing with toys, using cutlery, a paintbrush or pencil, or attempting to put together a block creation or house.

Dyspraxia, or Developmental Co-ordination Delay (DCD) as its also commonly known, is not necessarily a primary problem in motor co-ordination or execution. Indeed, the problem is normally hypothesised to be due to a difficulty in formulating the plan of action, for example perhaps your child being a bit clumsy when moving to a standing position from being sat down.

When considering an individual’s development, there are three specific components of praxis and/or development areas that a child with potential dyspraxia may find challenging:

The ability to grasp the idea to allow purposeful interaction with the environment. It involves knowing what to do with an object and being able to anticipate a plan of action.

The ability to plan and structure a purposeful adaptive response involving the motor and sensory systems. It also involves knowing how to move, and being able to send the right messages from the brain to the relevant muscles and areas of the sensory system in order to carry out the movements.

Carrying out the movement, and putting the plan into action.

When considering the brain, the cerebral cortex (the upper most part of the brain) receives impulses from sensory organs through a network of nerve fibres passing from the brain stem. As a child grows and learns, the connections between the nerve cells (neural pathways) become established and reinforced with successful learning. When a child learns a series of movement patterns the repetition of movement reinforces the pattern so that its planning becomes almost a reflexive response. The use of external sensory input such as sight and sound, together with the learned movement patterns, will enable the cerebral cortex to judge the best course of action and send out appropriate motor impulses.

The structure of the nervous system is made up of two cerebral hemispheres. The nerves contain neurons, which are either sensory neurons, going from body to brain, or motor neurons, going from brain to body. The muscles and organs in the body have receptors, which are there to react to changes in movement. Sensory input allows us to be aware of our surroundings, to perceive changes and gain knowledge so that we can plan our movements and coordinate our thoughts and emotions. We are able to process the information and we can then filter out unnecessary messages and process the complex instructions we have received, organise them and integrate them. The brain then decides on the messages to be sent to the muscles and ultimately what movements are required. An exhausting and rigid journey for the Dyspraxic brain.

In children with dyspraxia, the two hemispheres of the cerebral cortex are not working in harmony to produce the desired results, thus ideation, planning and motor execution are hindered.

For the majority of those with the condition, there is no known cause. Current research suggests that it is due to an immaturity of neurone development in the brain rather than to brain damage. The symptoms of Dyspraxia can be evident from an early age. Babies may be irritable from birth and may exhibit significant feeding problems. They are slow to achieve expected developmental milestones. For example, by the age of eight-months they may still not be able to sit up independently. Many children with dyspraxia fail to go through the crawling stage, preferring to “bottom shuffle” and then walk. Later, they will avoid tasks that require good manual dexterity.

According to the American Medical Association, the diagnostic criteria for Dyspraxia or DCD are:

A. Performance in daily activities that require motor co-ordination is substantially below that expected given the person’s chronological age and measured intelligence. This may be manifested by marked delays in achieving motor milestones (e.g. walking, crawling, sitting), dropping things, clumsiness, poor performance in sports, or poor handwriting.

B. The disturbance in Criterion A significantly interferes with academic achievement or activities of daily living.

C. The disturbance is not due to a general medical condition (e.g. cerebral palsy, hemiplegia, or muscular dystrophy) and does not meet the criteria for a Pervasive Developmental Disorder.

The motor processes of carrying out an act successfully is a complex task that requires conscious imaging, planning, positioning, balance, muscle activation and co-ordination. Common characteristics of a child who may be presenting with dyspraxic barriers include:

Occupational therapists are able to assess children with movement and co-ordination barriers to determine the exact nature of the difficulties and how it impacts the child’s day-to-day life. Therapy intervention focuses on how the child manages daily activities at home, school and play, and works on the assumption that children develop skills as a consequence of the interaction between the child, the environment and the task.

Most importantly, Occupational Therapists use purposeful activity and play to work with the child to help him or her attain the highest possible quality of life.

Through this client centred therapy parents who have a child with Dyspraxia or query the potential, can attain specific information, programmes and exercises to best support their child’s development.

Other useful resources include:

Between scorching hot days and thunderstorms and typhoons, you’ll no doubt be getting the family together for a board game session or two this...
Read more
Activities