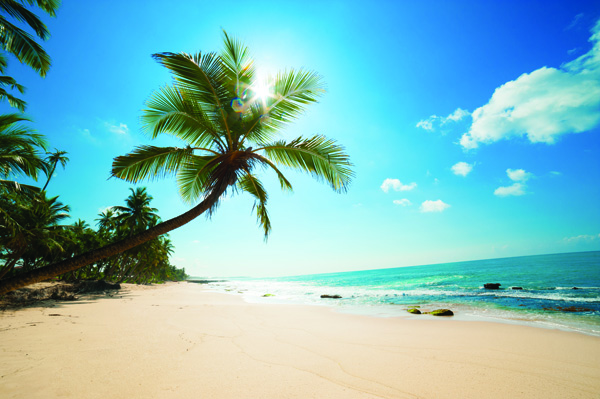 Hanging like a pendant from the ear of India, as Michael Ondaatje put it in his exquisite Running in the Family, Sri Lanka is at once luscious and deliciously romantic, deliriously colourful and evocative. Known as the “Island of Serendipity”, Sri Lanka rises from an azure blue coastline fringed with palms, to a mountainous interior roamed by elephants and leopards, to the cool highlands rich in temples and impossibly green tea plantations. It is simply beautiful.

To travel to Sri Lanka is to experience a country where nothing is standing still, where the energy of change abounds. Although the island is still recovering from more than 25 years of civil war, and the 2004 tsunami which claimed 35,000 lives there, it is now a safe and largely undiscovered paradise. Sri Lanka’s 2,000-plus years of culture can be uncovered at ancient sites throughout the island – few places have as many UNESCO World Heritage sites (eight) packed into such a small area.

We travelled with friends and our three children, Georgia (six), Ollie (four) and Lucia (one), and started our journey in the fabulous Galle area. Galle has a busy commercial district, but pass through the Fort gates and you are taken to a jaw-dropping fortress crammed with colonial flashbacks. Built by the Dutch in 1663, the fort area now houses chic shops, cafes and upscale hotels. Muslim, Christian and Hindu children all live in harmony, with each of their houses of worship positioned side by side within the Fort. We dined at the Galle Fort hotel, which offers a stunning mix of contemporary chic and five-star luxury.

From Galle, the road took us along the dazzling white beaches, past fishermen perched atop stilts, to the wonderful Polheena Estate, where we were staying. Nestled in the tea plantations and built in the early 19th century, the Estate is known locally as Walauwe, or manor house. As with most places in the Galle area, the architecture has been influenced equally by the Portuguese, Dutch and British. Early-morning walks were an unmissable ritual for the children, when it felt as though someone had left the gates open at the zoo: flocks of peacocks flew through rice fields, troops of monkeys leapt from banana to mango trees, metre-long monitor lizards leisurely crossed our paths, ox-peckers sat undisturbed on buffaloes’ backs and turquoise kingfishers flew overhead.

The fish market was alive with the early-morning catch, where wriggling lobsters sat by silver swordfish, giant tuna and out-sized blue-antennaed prawns (a steal at US$6 for four!). The spice market smelled of a bygone era and the children raked their hands through giant buckets of colourful powders – salt, cinnamon, pepper and cardamom. Back at the manor, pre-dinner cocktails under the stars, and the faint humming sound of the early-evening prayers from Yatagala, one of the oldest Buddhist temples in the region, coupled with a barbecue of goodies from the morning’s visit to the fish market meant the days passed very happily.

For my animal-mad children, a visit to the turtle sanctuary was a must. Five miles from Galle, in a simple shack on Habaraduwa beach, sits the Sea Turtle Farm & Hatchery – a not-for-profit organisation aimed at protecting the eggs left exposed on beaches. These are collected and incubated at the farm, and as dusk set, the children were able to release the baby turtles to the ocean themselves. Such an impact this had on my children that it is no wonder one of Lucia’s first words was “turtle.” 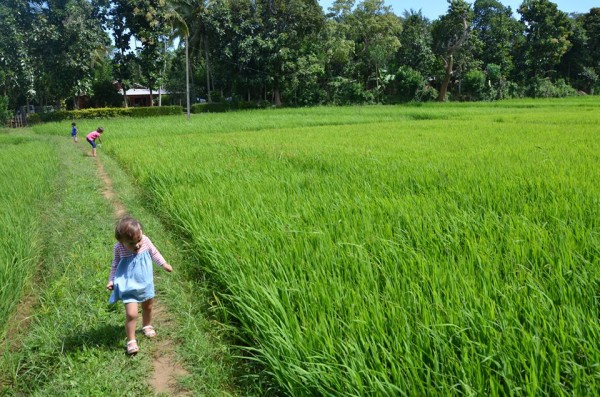 Another day, we chartered a sailing boat, found an expert and headed out to sea to find whales. Sri Lanka’s deep-water trenches offer one of the best locations in the world for seeing blue and sperm whales, and the only location in the world where they can be seen together. In fact, the area has one of the highest concentrations of cetaceans in the world. 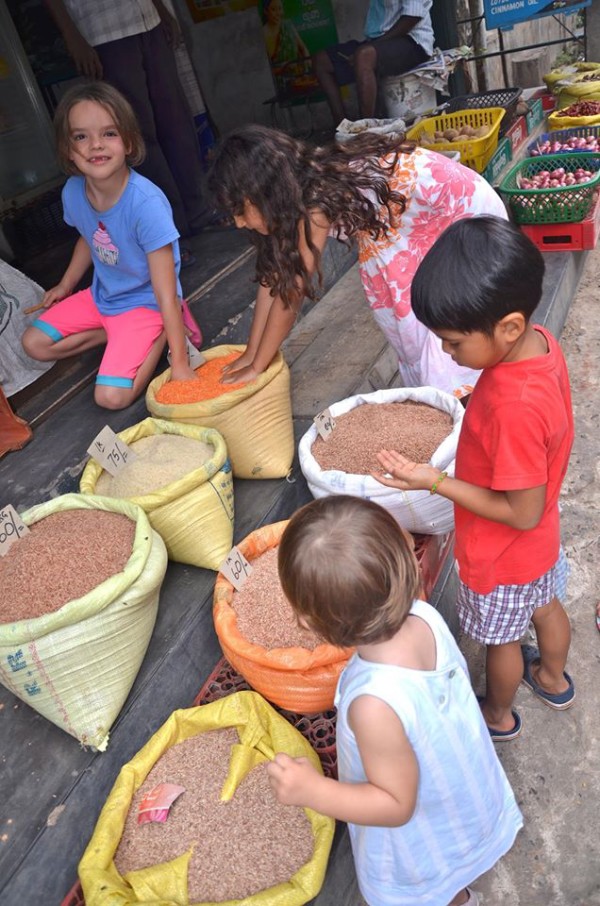 Back on land, we explored the area on foot and in tuk-tuks. We visited schools, where our children giggled with the uniform-clad children, and united in kicking king coconuts about. We passed women weaving on their porches and bathing in the local wells – their sun-drenched faces beaming with delight as they invited us in for tea. Everywhere we went, there were friendly smiles and a natural interest in the children.

We could have stayed forever, but we had to move on.

We travelled by private vehicle to Colombo, a hair-raising hour’s journey along which we stopped at a roadside cafe, ate roasted sweetcorn and drank the delicious yellow king coconut juice. In Colombo, we stayed in the historic Galle Face Hotel, a reflection of a bygone era and one of the oldest hotels east of the Suez, established in 1864.

In the afternoon, we walked along the seafront on the famous Galle Face Green, where we watched snake charmers charming and locals taking early-evening swims in the sea. Sri Lanka’s capital draws together all the colours and cultures that make up the island, condenses them into a patchwork of markets, gardens and buildings both humble and grand, and presses them against a narrow strip of beachfront. The decadence of a another era is omnipresent – the old racecourse, cricket on the lawns, the old cricket pub with arrows marking the distance to Lord’s Cricket Ground in London, and so on. 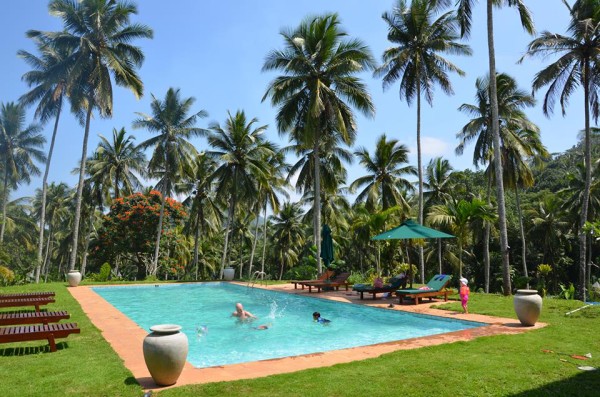 But then it was time to escape the tropics and head for the hills. It was a scramble at Colombo Railway Station and I felt as though we were on the set of a film. The impeccably dressed ticket collector took our tickets – his hair perfectly combed and set, and his polished brass buttons shining proudly on his navy blue blazer. Smiling faces hung out of the crowded doors that remained wide-open throughout our journey – such a peril for my small ones that I could not possibly nod off. The platform master’s khaki clothing was pressed and everyone was polite and charming. The old steam train chugged past tea plantations, up mountains and down valleys, with the snaking carriages and all their passengers bursting at the open doorways. 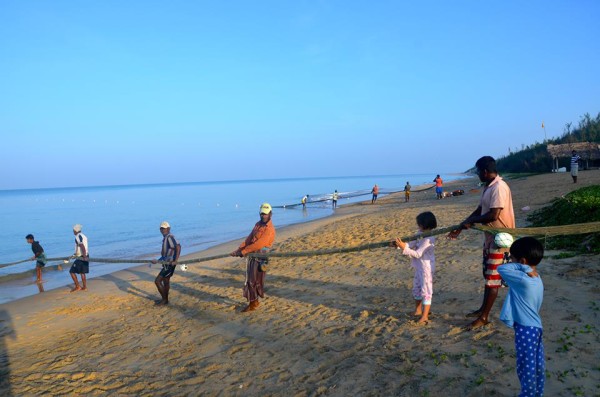 The British colonials brought their thirst for tea with them to Sri Lanka and the tea-planting industry boomed. You can still visit – and even stay in – the bungalows and estates that were once home to the British bosses. Walk the streets of Nuwara Eliya and you’ll think of England, with timber-framed buildings, gin and tonics at members’ clubs and even a horse-racing track. There are temples and sacred relics in the holy city of Kandy, where our train arrived six hours later, and we watched dancers walking on fire and visited the Temple of the Sacred Tooth Relic, where Buddha’s tooth rests – or is paraded on an elephant’s back during very special occasions.

We stayed at Jim’s Farm Villas, a 50-acre organic peppercorn farm, where the children milked the cows and collected the chickens’ eggs each morning before heading out on nature walks or lounging by the pool. In the local village, the chief monk invited us into his home and gave our family a blessing. There were Buddhist prayers and Sanskrit chants, and I have never seen the children sit so still, nor be so proud. We are now blessed with luck and fortune. 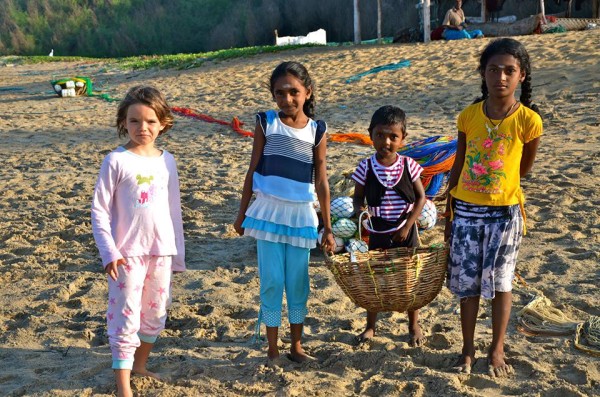 Our final stop was to the north, to Kalpitiya, where white sands fill pristine beaches and rows of fisherman pull in the morning’s catch. The men march in step, decades of family knowledge passed down their skinny legs and wrinkled hands. Slowly the nets came closer and Georgia and Ollie were invited to join them in their pulling. They sang and chanted and, as the net got closer to the shore, the yelling intensified – the net was pulled onto the sand, alive with the shakes of unlucky trumpet fish, prawns, cuttlefish and even seahorses. The kids delighted in finding sand dollars with alien-looking faces. That night, we feasted on more delicious seafood and watched a star-filled sky.

When it was time to go home, none of us was ready. Sri Lanka draws you in and never lets you forget it. We are hooked and we know we’ll be back.