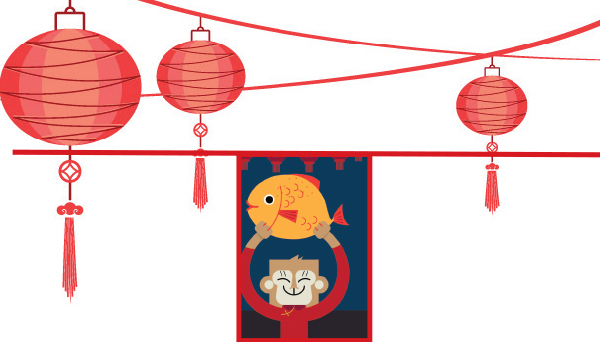 Although the Chinese New Year officially starts on 8 February, the Chinese zodiac year actually starts a little earlier, so if your baby is born on or after 4 February, they will be a Monkey. The Monkey is the ninth sign of the Chinese zodiac and is characterised in Chinese astrology by a clever and creative mind. It’s generally accepted that monkeys are flexible, full of life, versatile and quick to adapt. But new mothers can expect more than just cleverness and creativity.

“Babies born in the Year of the Monkey are wild in nature, restless and love freedom,” says feng shui and astrology consultant, Master Edwin Ma Lai Wah. Master Ma believes that while Monkeys are bright, they are also prone to unexpected mood swings that can dampen their spirits. “But by their nature they aren’t easily fooled,” says Master Ma. “They are a smart judge of character and are rarely deceived by others.”

Customs, beliefs and superstitions are a quintessential part of Chinese culture, and are influential in shaping the daily lives of many in China as well as Hong Kong. It’s popular with Chinese couples to plan for the birth of their children in what are seen as lucky years, such as the Year of the Dragon and even the Year of the Monkey, but not all.

The luckiest numbers for Monkeys are one, seven and eight, as well as the 14th and 28th of any Chinese lunar calendar month. White, blue and gold are lucky colours, and if you are looking for a congratulatory gift for new mothers, chrysanthemums or crape-myrtles are a great idea to mark the birth of a Monkey.

Master Ma has some sage advice for Monkeys: “When a problem occurs, give yourself time to observe what is happening, and then respond. This will be a more effective solution to the problem.”

Indeed, sage advice for us all.