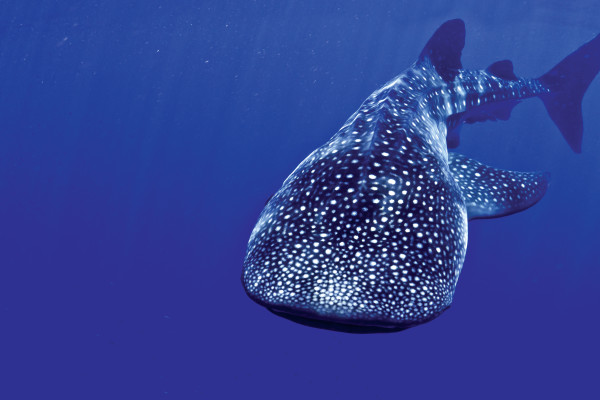 Butanding!” announced a spotter, pointing at a dark shadow lurking deep in the Philippine Sea off the coast of Donsol. “Quick, jump!” The great whale shark glided low in the water, propelled by its powerful spotted tail. Who in their right mind would jump?

Everyone looked at each other. We were only ten minutes from shore, but our bravado was already being challenged. Three spotters had kept a lookout, balancing on bamboo poles; another drove the boat; and the third was our guide – incredibly well-informed and passionate to his core about these enormous sea creatures, treating each one as an individual.

I scrambled to grab my fins and mask. One by one my fellow boat-mates jumped in and were gone in a second. My fearless two-year-old daughter was not staying behind. Resolute, she told me: “Coming, too, Mummy”. So, with my heart pounding and my daughter tucked in my left arm, we both jumped in. With my free right arm, I frantically swam through the currents to catch up. We were far behind the rest of our team, but the guide came to our rescue, clutching my wrist and pulling us forward. He urged us sideways, and there, just below the surface, the sun was illuminating huge spots and checks, and we saw it.

I was face to face with my first whale shark. We were swimming right above its head, which was a brilliant deep blue colour, splashed with white lines and dots, and a two-metre-wide mouth hoovering its path. What a magnificent sight! It must have been 11 metres long, though it was hard to tell. So close was it gliding that we had to move out of the way to avoid a collision. Its tail looked as though it should have been horizontal, yet it sat vertically at the end of a powerful, muscular abdomen, and its sharp, clearly identifiable dorsal fin stood proudly upright. Its broad, flat head gave it a prehistoric appearance. I was mesmerised. Arm in arm, my daughter and I swam as fast as we could, though it was hard to keep up with an animal that was swimming at two kilometres per hour.

Whale sharks can grow to an incredible 18 metres, weigh up to 40 tonnes and live up to 100 years. They are highly migratory, following food availability, water temperature and quality. Where they go during the off-season is – unbelievably – still unknown. As filter feeders, their huge mouths are lined with thousands of tiny teeth used neither for chewing nor biting. Since their food only flourishes in healthy waters, the whale sharks act as an indicator of a sea’s general health.

Recognisable by its navy blue checkerboard skin, the whale sharks can be spotted migrating to rich planktonic waters off the coast of Donsol, in the Bicol Region of the Philippines. Donsol’s residents – a mere 47,000 – live quietly in houses perched on black sands in the shadow of the great volcano Mount Mayon. Life was all about fishing until tourism took off, and soon the fishermen stopped the hunt and began their love affair with the butanding – the local name for the whale shark.

The whale shark isn’t actually a shark at all, but a fish – the world’s largest, in fact – and in these waters it can be found in abundance from December to May. But that wasn’t always the case. For years, the whale sharks were hunted, with one creature feeding an entire village for days. The eco-tourism opportunity has changed people’s outlook; they’re starting to see this as a longer-term investment.

In the Philippines, whale sharks are present around Bohol, Mindanao and Donsol. However, their numbers are still threatened by the export trade of their meat, skin and fins, which are considered delicacies in some parts of the world. Fortunately, in 1998, the Philippine government banned the killing of whale sharks. And now the most important consideration, in Donsol at least, is the animal’s well-being. The guides protect them ceaselessly, ensuring they are not frightened or touched in any way, and that swimmers maintain a one-metre distance. That said, my husband couldn’t resist the temptation and stretched out to touch a magnificent dorsal fin. He was quickly and severely reprimanded by our guide, and I was delighted to see that the rules were enforced!

To see them, you need to get an early start. After a quick registration that includes filling out forms and watching a video, you’re assigned to a boat and guide and allocated a snorkelling kit. Then off you go in your banca – a native bamboo boat. With just six swimmers per boat you feel as though you have the fish to yourself, and for adults and children alike, this is an unforgettable experience.

Back on the boat, resting after our first swim, the spotters were at work again and announced their second sighting. This time I went in alone, leaving our daughter in the capable hands of my husband. I floated above the gentle giant, my arms outstretched as though I were flying above the most graceful of animals. So elegant, so mighty. I swam close to its frighteningly shark-like eye, almost triangular and covered by a thin film. The eye rotated, keeping check on my whereabouts. I danced around its vast body and swam my way under its remora fish-laden belly and behind its tail. I could have been there for hours. To call it a fish seems like a huge understatement: it has to be one of the most stunning creatures to grace our planet.

It was our lucky morning, and we ended up seeing five whale sharks. The third and fourth jumps were just as magical as the first, and on our fifth jump, we left our daughter on board, only for a few moments, but long enough to swim side by side, husband and wife. I wished I could stay there forever, being carried by the currents through the dark abyss, gliding above the gentle giants of the sea. This had to be one of life’s great moments. 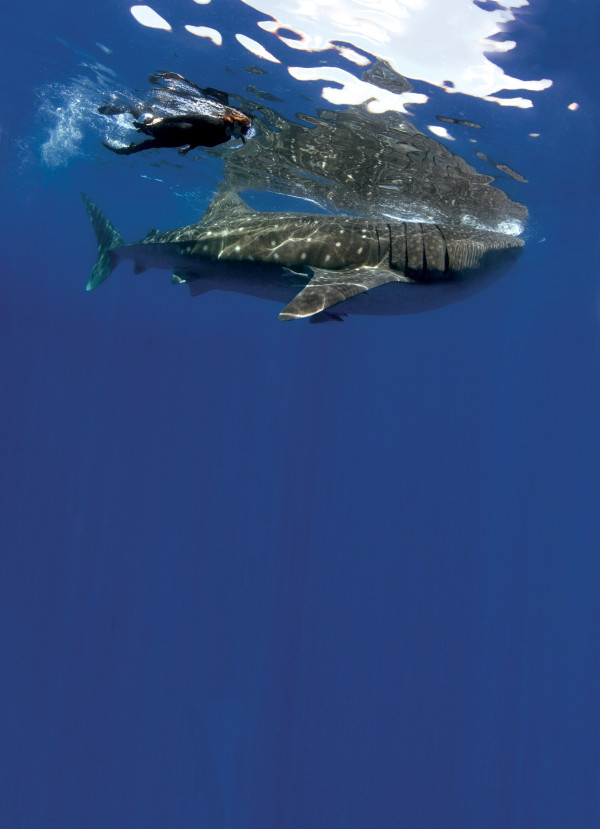