Reading Time: 5 minutesMid-Autumn Festival is right around the corner and what better way to start the celebrations than by learning about and sharing the history of this important celebration? Here are some interesting facts about the festival, where you can buy the best mooncakes, ideas on how to celebrate and a simple how-to guide to make your own lantern at home! Enjoy the wonderful Mid-Autumn holiday, also known around Hong Kong as the Lantern or Moon Festival, on 21 September 2021.

The Mid-Autumn Festival is pronounced in Cantonese as Jūng-chāu Jit (中秋節) and in Mandarin as Zhōngqiū Jié (中秋节).

When Do We Celebrate Mid-Autumn Festival?

According to history, the Mid-Autumn Festival is held on a full moon on the 15th day of the 8th month of the Chinese or lunar calendar. This typically occurs in mid-September to early October of the Gregorian or solar calendar. On this day, it is believed that the moon is at its fullest and it happens at harvest time in the middle of Autumn. 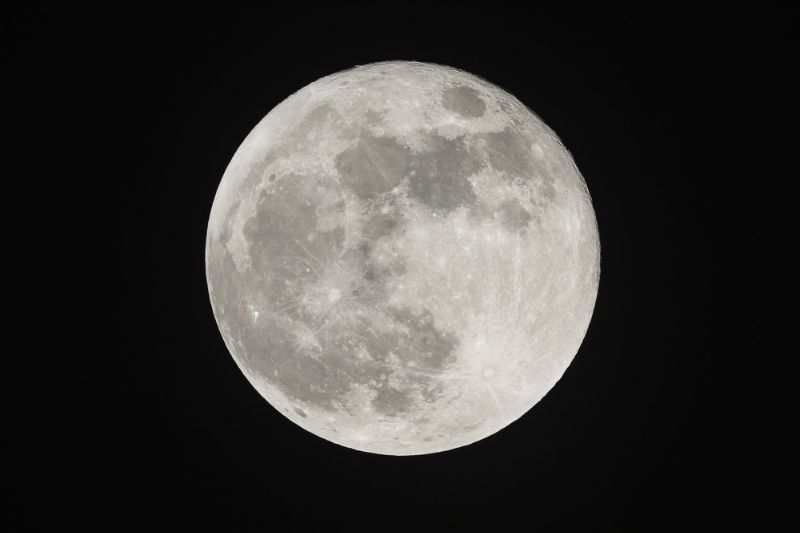 Why Do We Celebrate Mid-Autumn Festival?

China’s emperors worshipped the moon for bountiful harvests with a history dating back 3,000 years. Harvest time was a time to celebrate the bounties of the crops and to bring people together. The Chinese have celebrated the harvest during the autumn full moon since the Shang dynasty (1600–1046 BCE). However, the celebration as a festival only started to gain popularity during the early Tang dynasty (618–907 CE). One story explains that Emperor Xuanzong of Tang started to hold formal celebrations in his palace after having explored the Moon-Palace. By the Ming and Qing Dynasties, the mid autumn festival had become one of the main folk festivals in China.

An important part of the Mid-Autumn Festival celebration throughout history has been moon worship. The ancient Chinese believed that the moon and water were associated with rejuvenation.

The festival has carried on since this time as a way of gathering families and friends together to show appreciation, give thanks and admire the moon when it is at its fullest, perhaps similar to the Thanksgiving traditions in North America. 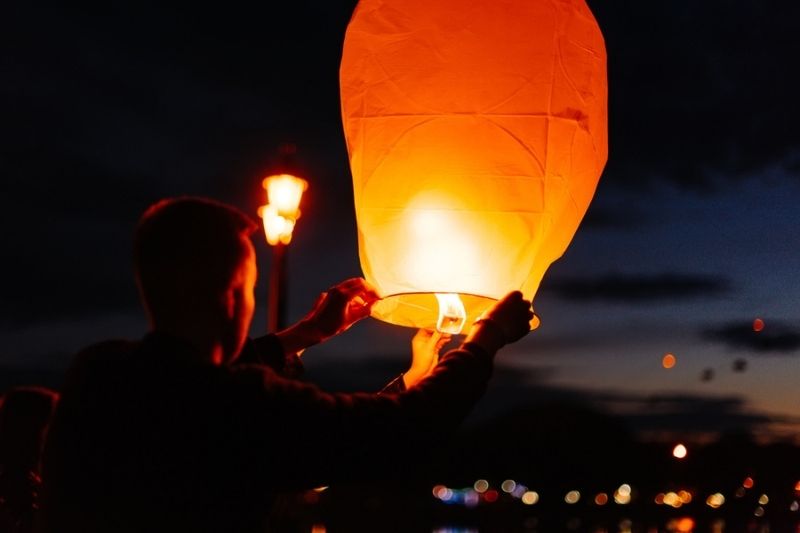 Myths and Legends of Mid-Autumn Festival

There is a delightful myth about the Mid-Autumn Festival. The story goes that an archer named Hou Yi was granted a potion for his heroism, giving him immortality. When Hou Yi’s apprentice tried to steal the potion for himself, Hou Yi’s wife drank it in an attempt to save it. She became immortal and drifted up to the moon, never to return. In order to catch a glimpse of his beloved wife, Hou Yi arranged a special feast on the day the moon was at its fullest and he did this each year. Since Hou Yi was a hero to all for saving them from drought, the people joined in the festival to support him and they prayed to the moon.

Celebrating With Mooncakes and Lanterns

Mid-Autumn Festival is a truly magical and beautiful festival. If you’ve been in Hong Kong for this festival, you’ll know it involves lanterns and mooncakes, among other traditions. Kids and adults alike carry lanterns of all shapes and sizes around the city at night. Lanterns are a symbol of lighting your path to prosperity and good fortune. Another tradition involving lanterns is to write riddles on them and have other people try to guess the answer!

Mooncakes are made of a very rich pastry and are typically filled with sweet-bean, egg yolk, meat or lotus-seed paste. Historically they were used to pass secret messages (printed on the outside of the cake). Mooncakes are usually cut into small wedges to share among friends and family with tea or special wine. 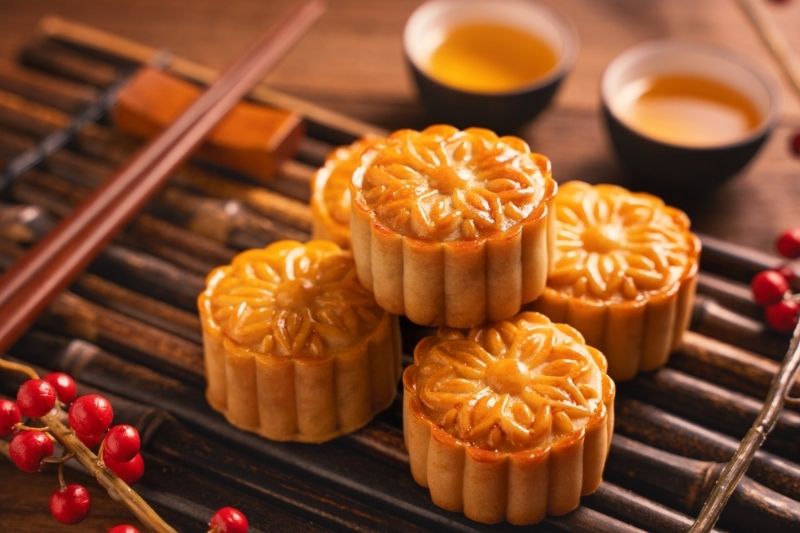 Mooncakes, tea, wine and fruit are often given as gifts among families and friends during the Mid-Autumn festival time. Here’s  our guide on where you can buy some amazing mooncakes.

Also, an eco-friendly way to celebrate Mid-Autumn Festival is to make your own lanterns! Check out our easy-to-follow guide.

The festival is celebrated with many other cultural customs, such as burning incense in respect to deities and the performance of dragon and lion dances, which is mainly practiced in southern China.

There’s a legend that in the 1880s, the residents of Tai Hang Village in the New Territories region of Hong Kong warded off a typhoon and a plague on the eve of the Mid-Autumn festival with a fire dance that lasted three days and three nights. The fire dragon was used in the parade and was made of straw and joss sticks (incense) which were set alight at night. Today it continues to be an impressive tradition during the Mid-Autumn Festival in Hong Kong.

If you have a chance to check it out, you won’t be sorry. The huge dragon, made of rope, straw and rattan, is 67m long and has thousands of incense sticks burning on its body and firecrackers lighting the surrounding area! 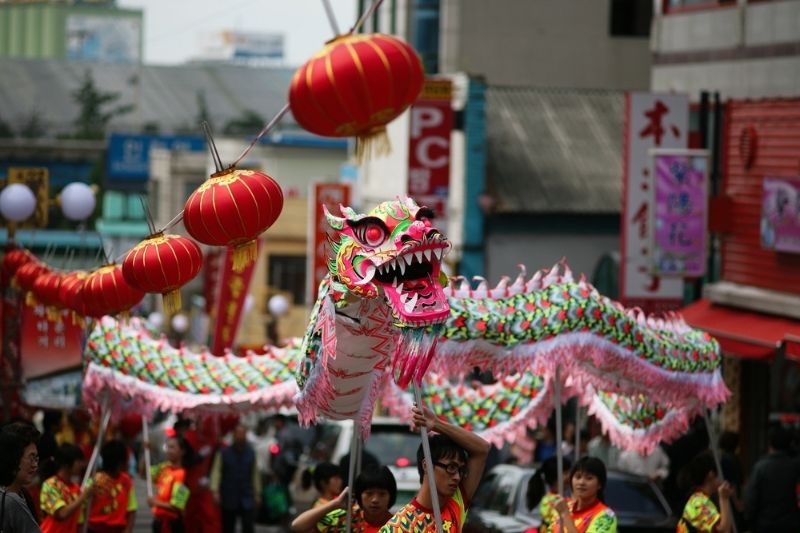 Sadly, many events have either been cancelled or postponed this year due to COVID-19, however these are some of the planned events:

The fourth floor of Hysan Place has been transformed into a “Heaven of Lights,” featuring more than 500 lanterns. You’ll also find a range of special promotions, member-exclusive programmes and seasonal menus that are sure to make this Mid-Autumn Festival a holiday to remember!

Head to Lee Tung Avenue in Wan Chai this Mid-Autumn Festival to see over 688 colourful lanterns hung on every corner of the boulevard, transforming it into a unique festive check-in hotspot. There will also be a charity market, exhibiting various handcrafts in collaboration with over 30 local units.

This event features the lantern displays and a full cultural programme including a Fire Dragon Dance, kung fu demonstrations and songs and crafts

This event is set up at the Hong Kong Cultural Centre Piazza. Opening hours for the event are Fridays through Sundays from 6:30pm – 11pm, until midnight on September 21, 2021.

Be sure to check out this 3.5 metre-tall Golden Autumn Lumiere interactive lantern installation at Temple Mall, which features a mirror-floored room full of lanterns that change colour when you move.

The Mid-Autumn Bazaar will feature nearly 100 flavours of mooncakes, including Taiwanese Taro and 70% Pure Musang King Durian-filing Snowy Mooncake, to name a few.

Tiffany Beeson
Tiffany Beeson is a content writer, editor, and copywriter with a focus on all aspects of health, parenting, education, families, and lifestyle. She also edits in the global real estate and finance sectors. Tiffany has contributed to large global publications in scientific research and holds a Master of Science degree in Physiology. She spent over 17 years of her career in the field of clinical research in the USA, Hong Kong, Europe, and Canada - writing protocols, standard operating procedures and data reports. Outside of writing, Tiffany enjoys spending time outdoors with her 2 children.

Our Picks of the Best Chinese New Year Camps in 2022

Valentines Day is almost around the corner and these local florists will surely help you to surprise your loved one. From luxury flowers handmade...
Read more