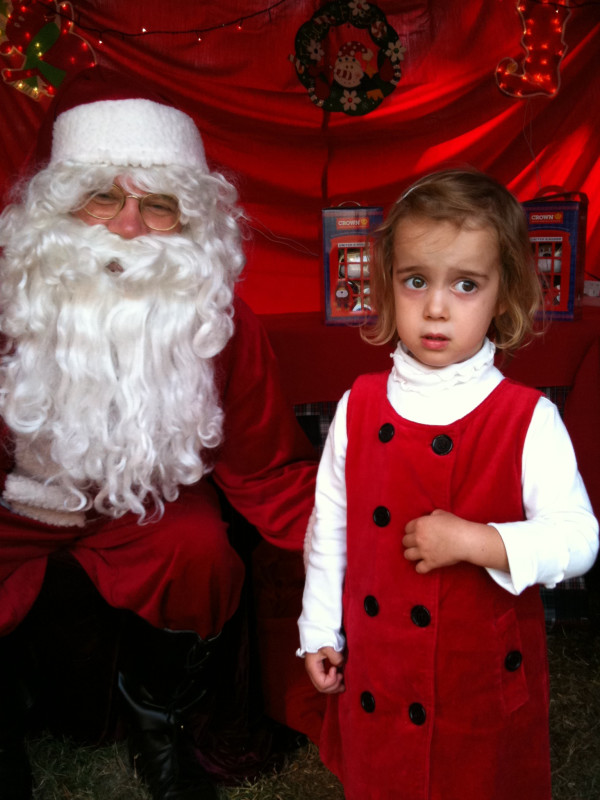 Some kids love Santa, while others scream at the sight of the merry old man. Introduced appropriately, Santa adds fun and excitement to the festive season, but listen to the lyrics of Santa Claus is Coming to Town and it’s no wonder why so many children are filled with fear when they meet the supposedly jolly fellow. We really can’t expect children to smile for the camera while seated on the lap of a stranger who, they believe, watches them while they sleep, disapproves of crying and refuses to give them presents if they have been naughty. Stories of Santa entering our homes in the middle of the night and snuffling all our nice food are unlikely to get our bubbas bouncing up and down for joy either.

If families want to enjoy the magic and mystery of the marvellous man in red, go easy on the Santa-as-spy stories, and introduce him as a fun and magical character, advises Cora Ha, parenting facilitator of Family Foundations Ltd. Before dashing to the mall with kids and camera in tow, spend time preparing your children for whom they are about to meet, while carefully considering their age, development needs and unique personalities.

Regardless of who’s come to town, infants need to eat and sleep on time. On the big day, be sure to have all the essentials that you will need for your baby’s comfort before joining the hour-long queue to meet Santa. Basic needs met, however, most babies will still bawl the second you hand them over to Santa, as Therese Tee, mother of two, knows only too well.

“Alanna was only 11 months old and she freaked out when she saw Santa. I still had to get a picture as a memento, and also to serve as a reminder that maybe she really was too little to meet such a big guy with a big personality!”

Cora advises parents against seating babies on Santa’s lap. She explains, “Santa is sitting in a strange place, wearing strange clothes, a white wig and a stick-on beard. For babies with ‘stranger anxiety’, it doesn’t get ‘stranger’ than that. Your baby is far more likely to warm up for a photo with Santa if you are the one holding her.”

Preparing toddlers and pre-schoolers for their annual outing can commence weeks before Santa makes an appearance. Kylie Fraser believes that reading Christmas books, watching DVDs, looking at photos and talking about Santa filled her 20-month-old daughter with eager anticipation. “She was the only one in her playgroup who didn’t freak out, and was even helping Santa hand out the presents to the other kids. When we took her for the photo with Santa, she was super excited and more than happy to climb up on his lap,” Kylie recalls.

Children may feel more comfortable meeting Santa when accompanied by friends or siblings. Rose Thomson’s daughter Leila, now four, is typically shy around strangers, while her closest friend is more sociable. “At first, Leila panicked when she saw Santa and clung to my leg, refusing to be in the picture. Then, as she watched Santa and her friend laughing together, she edged closer and stood by his side. Soon, both girls were giggling on his lap!”

While tears and fears are more likely to subside by the time a child turns five, some kids continue to fear the festive fellow. Jennifer Watson-Schmitz says, “My daughter has never really enjoyed those Santa visits. She is now five years old and is still petrified, even when it’s her own father dressed up at the school fair.”

A visit to see Santa can still be a success, even without the customary Christmas photo. As Sarah Benhacine recalls stories of her eldest daughter, now five, screaming by Santa’s side, she ponders, “What’s the big deal if you don’t have a photo of your child sitting with Santa every year? The most important thing is to make sure that you take plenty of photos of your family together on Christmas Day!” Sarah believes that the best way to gauge a child’s level of comfort with Santa is to stop by his hut and let children look on from a distance. Ask them if they would like to say hello to Santa and if they refuse, then enjoy the tree, decorations and festivities at the mall instead.

Respecting children’s wishes is the ultimate way to ensure that they enjoy their first outing to see Santa. Children will let you know their preferences, and if they choose to snuggle in Mummy’s arms instead of Santa’s lap, then so be it. You may not capture the desired “Santa Claus and smiling kids” photo this time round, but don’t worry: there’s always next year!

Our Guide to Celebrating Diwali in Hong Kong

What is Diwali and why is it celebrated? Diwali is called the Festival of Lights and it is one of the most popular Hindu festivals...
Read more
Activities

It's Halloween time which means only one thing – time to get spooky! To get the family in the mood, here's our picks of...
Read more